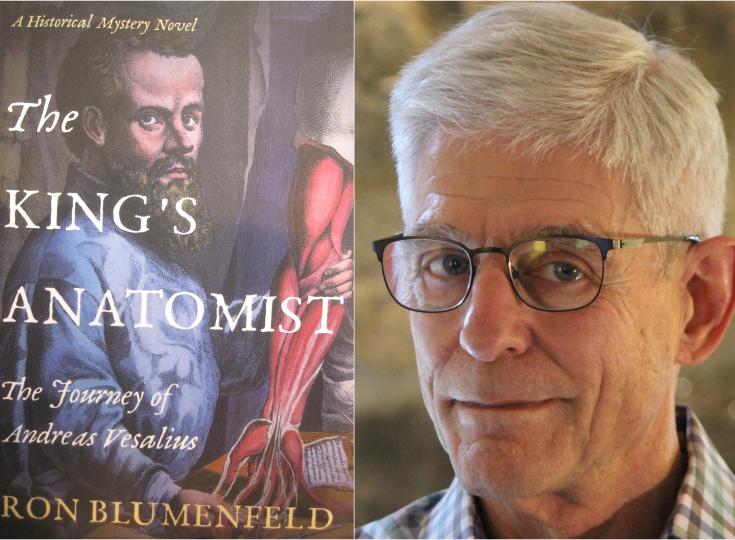 Ron Blumenfeld is a retired pediatrician and healthcare executive. Ron grew up in the Bronx, New York in the shadow of Yankee Stadium and studied at City College of New York before receiving his MD degree from the SUNY Downstate Health Sciences Center. After completing his pediatrics residency at the University of Arizona, he and his family settled in Connecticut, but Tucson remains their second home. Upon retirement, he became a columnist for his town’s newspaper, a pleasure he surrendered to concentrate on his debut novel, The King’s Anatomist (October 12, 2021). Ron’s love of books springs from his childhood years spent in an antiquarian bookstore in Manhattan, where his mother was the only employee. As our Author of the Day, he tells us all

Please give us a short introduction to what The King's Anatomist is about.

In 1565 Brussels, the reclusive mathematician Jan van den Bossche receives the shocking news in Brussels that his lifelong friend, the renowned anatomist and imperial physician Andreas Vesalius, has died on the Greek island of Zante returning from a pilgrimage to the Holy Land. Grief-stricken, Jan journeys to Greece with his assistant Marcus to visit his friend’s grave. The memory-laden journey leads to revelations about Andreas’s life and to a shocking discovery on Zante. Making matters worse is Jan’s complicated relationship with Andreas’s widow, Anne.

The inspiration for The King’s Anatomist was fifty years in the making. My mother worked in a rare bookstore in Manhattan. When I was in high school and thinking about a career in medicine, the owners of the store gave me a just-published biography of Andreas Vesalius. I bailed on it after twenty pages; it was too academic for my high-school brain. So, it sat on my bookshelf for a half-century. After I retired, I decided to give it another try. I was ready to read it! I discovered a courageous medical scientist who had a fascinating career and an intriguing death. The wheels began to spin for a story based on his life.

Why did you pick 1565 as the backdrop for your story?

Vesalius died in Greece in late 1564. I decided to start the story when his friend Jan would have received the news in Brussels, in early 1565. In the 16th century, news traveled only as fast as the people bringing it.

In addition to the Vesalius biography, I read several books and scholarly articles about the history of anatomy within the broad scope of the history of medicine. I had to bring myself up to speed on 16th-century European life. It turns out it was a busy century: the artistic and intellectual currents of the Renaissance, the constant wars, the Protestant Reformation (and the religious conflicts that followed), and the continuing outbreaks of the plague. I sought out information on everyday matters of clothes, food, and schooling. And as the book is centered on a cross-continental journey, I needed to understand what it was like to travel.

As a physician, I was very much taken by the state of medical education and practice in the 16th-century, and how little progress had been made since second-century Rome. It made the achievement of Vesalius all the more remarkable; his groundbreaking textbook of anatomy – The Structure of the Human Body – successfully challenged thirteen centuries of dogma. It made him famous – and infamous – in medical circles. Change did not come easily for physicians stuck on the old teachings.

I was fortunate to attend a 500th-anniversary Vesalius conference in 2014 on the island where he died, now known as Zakynthos. There I met Vesalius experts who graciously fielded questions from me as I wrote the book.

When I was a kid growing up in the Yankee Stadium neighborhood of the South Bronx, I was very good at getting into ballgames for free; those days are long over. I speak and read French pretty passably, but my fluency has faded from disuse. Like many people during the pandemic, I started to bake bread and simple desserts.

You used to work as a health care professional. How has this influenced your worldview and writing?

During my medical career, as a clinician and as an administrator, I never passed up an opportunity to write, be it letters to patients, health-related articles, newspaper columns, reports, whatever came my way. It kept the writer inside me alive until I took on the challenge of writing a novel. As a pediatrician, I developed long-term relationships with families, and I was honored to know unsung heroes of everyday life as they went through their struggles and triumphs. I learned the lesson of suspending judgment, as it is so difficult to understand what lies behind people’s actions. That perspective is an underlying theme of my book.

Tell us more about Jan van den Bossche. What makes him tick?

Jan is fictional, but so crucial to the story that he could even be considered the protagonist. He is an uncannily brilliant mathematician, painfully shy as a child. He is indebted to Andreas for befriending him in primary school and pushing him to distance himself from his overprotective mother. Over time a deep symbiotic relationship develops between them, but Andreas remains dominant. Jan’s devotion to Andreas runs deep, and he finds himself in situations he would never choose had Andreas not beckoned him. Jan’s enduring feelings for Andreas’s wife Anne presents a huge problem for him.

I certainly hope they’ll come away with an appreciation for the genius and courage of Andreas Vesalius, and for his unique place in the history of medicine. But also, I hope they enjoy the story! Through a slowly unfolding mystery, I tried to show how you may never know someone completely, even those very close to you.

I loved writing this book, though it was a long and solitary process and not always easy on family life. The ordeal of finding a publisher taught me resilience in the face of repeated rejection. I was thrilled to finally hold my novel in my hands, and quickly learned that my work was only half done – there was the matter of selling my novel in the vast global publishing marketplace. I’m still recovering from a mild case of Imposter Syndrome, but I’m gratified by the response it’s had in my little corner of the reading galaxy.

The cover is a dramatically colorized drawing of Vesalius taken from the first page of his famous textbook. It’s the only known image of him drawn from life. Andreas is shown in his Sunday best dissecting the muscles of the forearm. His face projects the intensity of his personality and his passion for his work. I can imagine no other cover.

My writing day does not start without breakfast, coffee, and a warm-up word game. I quickly learned to approach writing a book as a job; you show up, sit down at your desk, and work. I use the term “work” loosely, because on most days I was engrossed in the process. Writing, to me, is largely a problem-solving experience. I found that brief breaks increased my productivity. I cannot imagine writing longhand, but that’s just me.

I’m in the early stages of outlining a sequel to The King’s Anatomist – there are loose ends to tie up! I wrote columns for my local newspaper, mainly on the history of the town, and I’m revisiting them with the idea of republishing them as a collection for local consumption.

The best way is to visit my website: https://ronblumenfeldauthor.com/ There’s more about me, my blog posts, what I’ve been reading, and a link to contact me directly by email. 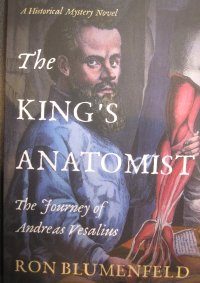 Ron Blumenfeld
In 1565 Brussels, the reclusive mathematician Jan van den Bossche receives shattering news that his lifelong friend, the renowned and controversial anatomist Andreas Vesalius, has died on the Greek island of Zante returning from a pilgrimage to the Holy Land. Jan decides to journey to his friend’s grave to offer his last goodbye. The fateful journey leads to a shocking discovery on Zante.
Historical Fiction
$0.99
$6.49
Amazon
Kobo
Google
Smashwords