Sari Gilbert - An Intriguing Story Set in 1980 in Italy 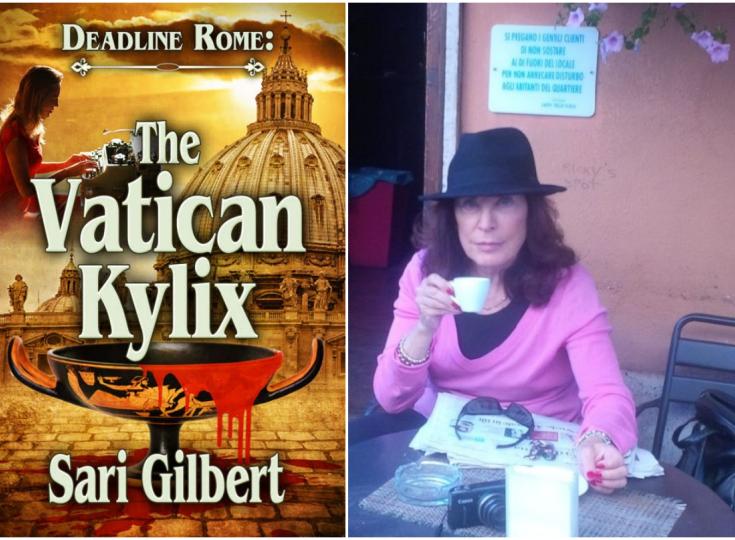 Sari Gilbert fell in love with Italy at a tender age and has been living in Rome since the 1970s when she moved there to complete her graduate studies in International Relations – she has both an M.A. and a Ph.D - and then found work there as a reporter and foreign correspondent. Over the years, except for fashion shows and soccer games, Gilbert covered just about every kind of news story there was to cover in Italy: elections, government crises, Mafia trials, terrorism, papal assassination attempts, immigration and immigrant smuggling, political corruption, earthquakes, food, tourism, business and banking, with the result that she knows a great deal about this delightful, frustrating and terribly complicated country. Her first book, My Home Sweet Rome: Living (and Loving) in the Eternal City, provides a comprehensive – and entertaining – look at the ins and outs of life in Italy. This is her first novel. As our Author of the Day, she tells us all about it.

Please give us a short introduction to what Deadline Rome is about.

The book is about a dynamic free-lance woman journalist based in Rome who on a visit to an Etruscan tomb accidently discovers a kidnapping and, subsequently, that that crime is linked to a fraudulent purchase by the Vatican Museum of a precious Greek wine cup.

I have long wanted to try my hand at writing a mystery/thriller. It’s one of my own favorite reading genres and I thought it was time to write one myself. I covered Italy as a foreign and local correspondent for almost four decades and for at least half of this period, kidnappings for ransom were a veritable scourge here in this country. Archeology is a passion of mine. And as for the Vatican; it’s presence has always loomed large for anyone interested either in history or current events.

Why did you pick 1980 as the timeframe for this story?

Primarily, this was because my idea has always been to write four or five sequels and thus to allow Clare to grow and change and, at the same time, to be able to recount developments that have affected Italian life and consequently the life of any news person operating here.

Tell us more about Clare Phillips. What makes her tick?

Clare is a dynamic young woman who came to Italy with a fellowship after her UK degree in archeology and sort of just fell into journalism. She happens to be a beautiful strawberry blond and in Italy, let’s face it, being beautiful is always an asset. She likes men and is not very scrupulous about their marital status. But above all she is ambitious and now that she’s gotten into journalism, and has landed a stringer’s job with the prestigious Washington Post, she is determined to make a name for herself.

Not all that much, except perhaps regarding certain aspects of the Catholic religion of which I am not a follower. Having been in Rome and in Italy for so long – I also did undergraduate and graduate studies in Florence, Bologna and Rome – I have accumulated a lot of knowledge a+bout the country. And I was always able to check things on the internet – these days research is so much easier than in the past – or with colleagues and friends.

Skills? I don’t know. I am an avid reader, I love cooking – and eating. I have a horse and go riding although not as often as in other periods. I go to the gym several days a week. And I love to travel. Despite Covid, over the last 12 months I have nevertheless managed to visit Venice, Florence, Arezzo, Turin and Palermo. And I’ve been to Greece three times and once – just last month – to Istanbul for a fascinating two weeks.

Well, some of the characters were people who really existed, or in the case of a couple of colleagues, still do. I enjoyed inserting them into the story and feeling close to them. Other characters were composites and I put together first names and last names: It all made me feel quite nostalgic.

I also had fun describing stores, piazzas, walks that I do or have done, hoping to either bring them alive to people who know Rome or make others feel like visiting.

Readers say this is a real page-turner. How did you pull this off?

To be honest, I am not sure. The only thing that I can say is that I may have somehow have absorbed (by osmosis) writing techniques from the authors of the thousands of mystery/thrillers I have read over the years.

The Archbishop. In part, he was modelled on an archbishop I knew of years ago who everyone disliked. But not having had much contact with any real archbishops, it required a bit of imagination. On the other hand, I do have a very close friend who is now a bishop emeritus and who was the model for the other (admirable) clergyman in the story, Bishop Mulligan.

Where does your fascination with Rome come from?

For some reason, I fell in love with the Mediterranean when I was a teenager. I was always reading books set in Spain, France, Italy and Greece, and studying art from those countries. I guess I narrowed in on Italy when - or after – in my junior year I decided to do Syracuse University’s Semester Abroad program in Florence. Then I felt I just HAD to go back to Italy (and did so repeatedly) and my original loves - history , Renaissance Art, Italian food (and men) segued into a fascination with Italian politics when I did degrees in Political Science and International Relations. I became what was then called in PoliSci jargon an “italianista”. Not a label I would any longer claim title to.

Oh, the cover was really fun. I worked with an Italian graphic artist named Filippo Ceci and we did lots of experiments with kylikes, blood, Saint Peter’s cupola etc. .and then decided to insert on the upper left side the figure of a woman sitting at a typewriter. We put that int the frontispiece as well, in black and white, and strangely enough it resembles me quite a lot, or at least what I looked like back then.

I am trying to get up the energy to start working on a sequel which will take place five years later, in 1985. I’ve been very busy trying to promote the book and also, despite Covid, to do some travelling. I am also planning on slowly reactivating my two blogs: My Home Sweet Rome, which is tied to the memoir I wrote several years ago about my life in Rome, “My Home Sweet Rome: Living (and loving) in the Eternal City”, and which is also available on Amazon and on Smashwords. Another blog I want to spend more time on is called Sari Gilbert’s Italy Users’ Guide.