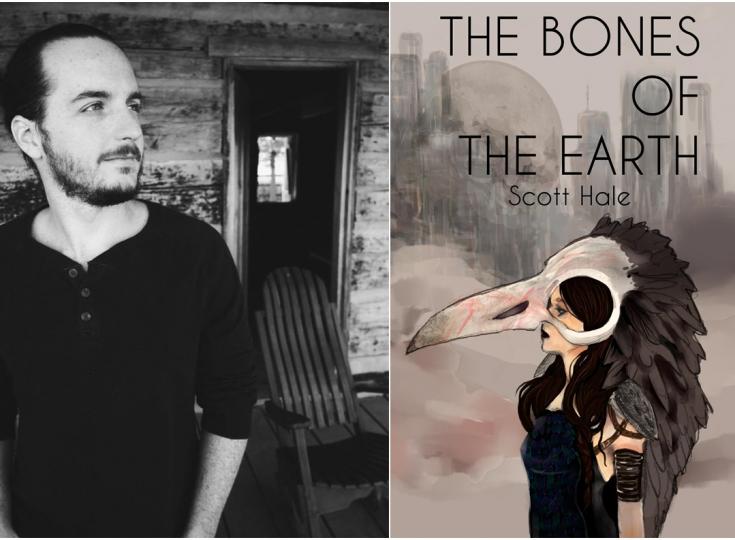 Scot Hale likes to experiment with how gray he can make a character’s morality, while keeping them relatable to the audience. Post-apocalyptic fantasy/horror provides the perfect setting to do just that, with his book, The Bones of the Earth, a prime example. Hale describes it as a strange world that is both familiar and alien - similar to nightmares one might have from PTSD. As our Author of the Day, Hale tells us more about The Bones of the Earth and some of the other books in the series.

Please give us a short introduction to what The Bones of the Earth is about.

The Bones of the Earth is the first book in the fantasy/horror series by the same name. It’s a book about a world that has managed to limp away from a catastrophic event, and the creatures and characters who each have their own ideas about how to heal the world; even if healing it means killing it and everything on it.

Your book explores, among other themes, what it means to be human. Why did you find this an important theme to explore?

I think it’s interesting what we convince ourselves is human, and what is justified because it is done in the name and for the sake of humanity; especially when throughout history, and even now, we seem to go out of our way to fragment humanity, label who’s worthy and who isn’t.

For me, I enjoy writing this series because there are a lot of literal and figurative monsters in it. I like seeing how gray I can make a character’s morality, while keeping them relatable to the audience. Humanity, myself totally included, always wants things to be very binary—Yes or no—but that’s not the way the world or life works, and monsters are such a good way to explore that.

Why post-apocalyptic fantasy? What drew you to the genre?

Why post-apocalyptic fantasy? Well, I like post-apocalyptic stories, and I like fantasy stories, but on their own? They’ve gotten a little tired. And when you combine the two—that is, melding the new (modern) with the old (fantasy)—you end up with this strange world that is both familiar and alien. Kind of like flashbacks or nightmares one might have from Post-Traumatic Stress Disorder.

To me, though, the book and series are rooted in horror. When I would watch/read post-apocalyptic/fantasy movies and novels, there were often those very memorable, fleeting moments of horror that stood out from the rest of the story, and I always wanted more. I always wanted a series that had all that genre goodness, but it was steeped in horror.

Tell us more about the Trauma - why did you use this as your apocalypse?

It’s hard to talk about the Trauma without spoiling it. The Trauma is a catastrophic event that literally reshaped the world and the minds of those living on it. It happened some untold time ago, and it could very well happen again. I apologize for being vague, but if you do read the book, know that the Trauma is explained throughout the series. It’s an important mystery, but it is one that is solved and explored further.

The Bones of the Earth took me the longest out of all the books to write. It was the first book I’ve ever written, and I rewrote it many, many… ugh… many times. It took me between two to three years to finish it and release it.

Nowadays, I seem to be able to release two books a year. It’s hard to say how long it all takes, as I just keep going once I’ve finished a project.

I wouldn’t say I have a set of rules that I follow. At least, none that I reference consciously. I have the story that I want to write and I know where I want it to go, but everything that happens along the way? I try to keep it as organic as possible.

Rules… rules. There has to be horror. It can be psychological or it can be nasty, yummy body horror, but there has to be horror. But horror doesn’t hit that hard if you don’t care about the world or the people who inhabit it. I try to make my characters realistic, believable, however unreal and unbelievable they might be.

Though it has the trappings of a fantasy book, my characters seldom talk like fantasy characters, or really go through the typical issues fantasy characters go through. I’m a fulltime mental health therapist, and I use that all that knowledge I’ve learned from my clients (their nonverbals, their problems, their attempts at solutions, their failures and successes) to craft my characters and the systems they belong to.

None. I’m totally lame. Like I mentioned earlier, I’m a mental health therapist (a licensed independent social worker supervisor to be specific… la de da). I love movies, though. My brother and I have been working on writing and directing our own lately. It’ll be interesting to see where that goes.

One reader describes some of the scenes in your book as "WTF moments when you don't know if what is happening is real or just a dream" - why did you take this approach?

Because I like taking people out of their comfort zones. I like warping what is real and what isn’t, and challenging people’s expectations, especially when they want something to be a dream, but it isn’t; instead, it’s very real, and something you’ll have to come to terms with in the book. I think the book/series and its mixing of genres can inspire those “WTF” moments because it is very different from what’s out there, and our first reaction is that it has to be a dream. I like that. I like when authors write themselves into the corner over and over and challenge themselves to get out of it.

The worldbuilding and tone were the greatest challenges when it came to writing the book. It wasn’t until I started on the second book, The Three Heretics, which I did before publishing Bones, that everything clicked.

The Bones of the Earth follows only one character, Vrana, and her worldview is rather limited, which for a while, made my view of her world limited. Once I started on The Three Heretics, everything opened up.

As for tone, I, for the longest time, wrote stories that sounded very literary. And when I started Bones, the book had that same feeling to it. But the more I wrote it, the more relaxed my style became, the more human my characters felt. And I realized what I wanted is that I wanted the book to be written with the same care to prose and themes and all that fancy stuff that literary novels have, but with the excitement and creativity and weirdness found more so in genre work.

The Bones of the Earth also features animals with mutations - what inspired you to create these creatures?

I love body horror. I love oozing, stinking, curdled and coagulated, twisted, assimilated, and turned inside-out things. The Night Terrors wear animal skulls, but they are not animals themselves, or so they tell themselves.

Do you ever suffer from writer’s block? What do you do to combat it?

I do not, surprisingly. What typically happens is that I get stumped on how to open a chapter. For me, the first paragraph guides everything. After that’s surmounted, though, it’s smooth sailing.

The covers of your books have a very specific style. Tell us more about the design.

The design of the covers really centers around characters and colors. All the novels covers have a distinct pallet or color theme that is intertwined with the feel of each story. The backgrounds are somewhat vague but give a little glimpse into the landscape of the post apocalyptic world. The characters on the covers really take center stage. Each book features a protagonist and antagonist on the front and back of the books. We continued this as a design element so there was sort of a common theme or style to each cover. My fiancé Hannah used a mixture of traditional pencil work and digital painting. This gives the art work a sort of surreal and almost dark fairytale feel to them.

I am working on publishing The Agony of After, the second horror anthology that supplements The Bones of the Earth series (the first being The Blood of Before). While doing that, I am writing the final book in the series (Book Four, though technically book six if you included the anthologies), which is entitled The Eight Apostates.