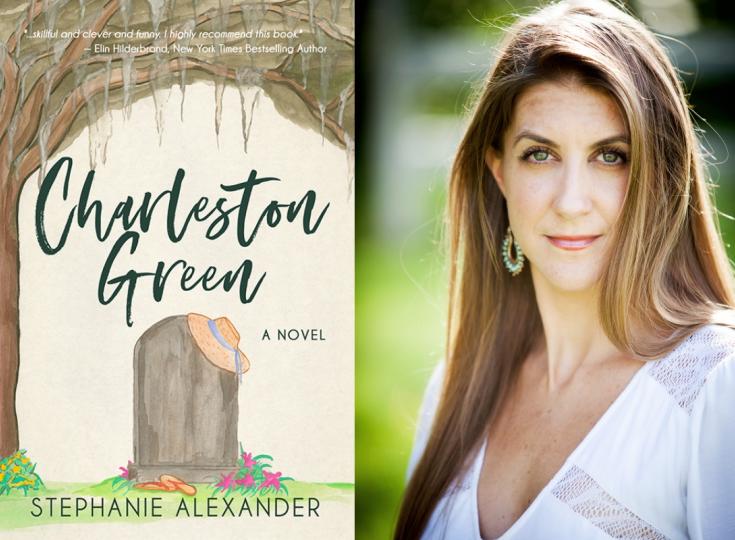 Stephanie Alexander writes enchanting, fantastical stories for thoughtful, modern women. Her best-selling fantasy trilogy, the Cracked Slipper Series, is a fractured fairy tale set in a world of magic and wonder, but with a surprisingly relatable heroine. Her upcoming novel, Charleston Green, is another exploration of women's everyday trials and tribulations, with a hefty dose of southern charm and supernatural intrigue. Stephanie has always been a fantasy nerd at heart. She grew up in the suburbs of Washington, DC, the oldest of three children. Drawing, writing stories, and harassing her parents for a pony consumed much of her childhood. After graduating from high school in 1995 she earned a Bachelor of Arts in Communications from the College of Charleston, South Carolina. She returned to Washington, DC, where she followed a long-time fascination with sociopolitical structures and women’s issues to a Master of Arts in Sociology from the American University. After ten years in DC, she returned to Charleston with her family. She graduated with honors from the Charleston School of Law, and currently practices family law in Mount Pleasant, South Carolina. Stephanie and her husband live in the Charleston area with their blended family of five teenagers and their miniature dachshunds, Trinket and Tipsy. As our Author of the Day, she tells us all about Charleston Green.

Please give us a short introduction to what Charleston Green is about.

CHARLESTON GREEN introduces Southern spitfire Tiffany “Tipsy” Collins, a clairvoyant artistic genius, as she rebuilds her life after a devastating divorce. Tipsy moves into a historic house in the Old Village of Mount Pleasant, a tony Charleston suburb, and discovers she’s inherited two undead roommates. Married couple Jane and Henry Mott have been haunting the house for almost a century. They hate each other, because Jane thinks Henry killed her and then killed himself. He denies her accusations, but neither phantom remembers what really happened. Tipsy must use her supernatural and investigative powers to solve the mystery, all while mothering her three children, managing her vindictive ex-husband, rebuilding her painting career, venturing into the dating pool, and navigating Charleston’s quirky small-town social scene.

What inspired you to write about someone who gets to share a house with a ghostly unhappily married couple?

I've been through a divorce myself. I have experienced both the pain of rebuilding and the personal growth that comes with it, so I wanted to explore these themes. One day I was thinking about the concept of "'til death do us part," and I had a thought: What if you're unhappy in your marriage, and you can't even get away from your spouse at death? What if you're stuck together, forever? The idea for Charleston Green came together pretty quickly after that as a vehicle to let me tell a story about rebuilding one's life while using the ghostly elements to add symbolic and metaphorical depth.

Tell us more about Tipsy Collins. What makes her so special?

Tipsy is a person who came from a very difficult upbringing. She grew up in poverty in the South Carolina upstate, which is part of Appalachia, to teenage parents who were never really there for her. Her father is an alcoholic and her mother is, as Tipsy describes her, "a flake." Tipsy always lived with her maternal grandmother, Granna, and while her parents lived with them when she was young, they basically abandoned her and moved away when she was fourteen. She is estranged from them, and her beloved Granna passed away when she was eighteen, leaving her a sort of orphan. She's shown prodigious artistic talent her entire life, and propelled by Granna's love and guidance and her own desire to do something meaningful with her life, she earned an art scholarship to the University of South Carolina. She ended up marrying Ayers Collins, the son of a wealthy family, and moved to his hometown of Charleston. She married young, had children, and put aside her own dreams to care for her family. In her mid-thirties, she realizes she can't stay married to the emotionally volatile Ayers, and makes the painful decision to get divorced. She's left in a precarious financial situation, and must rebuild her entire personal and professional life. She takes on this challenge because she knows she must do so in order to be true to herself, and because she hopes to save her own children from repeating her dysfunctional marriage. She's smart, talented, honest, loyal, empathetic, and protective of the people she loves. She's resilient and loves to laugh. She's also special because she's a clairvoyant! She's had to manage her clairvoyance all her life. It's made her a stronger person. As a writer, I love and admire Tipsy like she's a member of my family.

How has your work as a lawyer influenced your writing?

In addition to my personal experience with divorce, I'm also a family court attorney. My legal work definitely influences my writing, especially Charleston Green. I work with people every day as they're navigating the challenges of divorce and co-parenting. It's also helpful to be a divorce attorney when one is writing about divorce and custody issues because I understand the laws and the process, so that lends credibility to my characters' experiences.

Tipsy is a lovable, flawed, complex heroine. Why did you create her this way?

I wanted Tipsy to be relatable. For all the reasons I stated above, she's an amazing person. No one is perfect, however, and Tipsy definitely has her weaknesses, many of which come from her upbringing. She often feels like she's not good enough, she has trouble standing up for herself even as she always stands up for everyone else, and she tends to want to "save" people to a fault. She also makes a lot of mistakes post-divorce in her own relationships, whether it be dating or friendships. As someone who has been through a divorce and an attorney who works with people going through it every day, I know that every single person who goes through this process makes mistakes and does things they regret. Divorce is one of the most difficult and traumatic life events, and it's messy. I wanted to give my readers a realistic heroine who is admirable but not above the kinds of flubs and missteps that are only natural. I wanted readers to root for her even as they see themselves in her mistakes. She's a work in progress like we all are.

Why did you pick Charleston as the backdrop for your story?

I live in Charleston, so it's a natural setting for me. I've lived here most of my adult life, starting when I arrived at the College of Charleston in 1995. Charleston is a beautiful and amazing city, but it has a long, complicated history. It's romanticized for a reason. There is no place else in the United States I'd rather live. There is, however, an element of grittiness below the surface. The city is not as perfect as it seems, and neither are the people. It's a "big small town," and there is a strong party culture here. That combination leads to a lot of drama and some wild stories! It's the best and worst of Southern culture, all wrapped up in a beautiful picture. It's the perfect place to set a story that combines modernity with history.

In this book, I might say Tipsy's grandmother, Granna. Granna is sort of like Tipsy's conscience. She's been dead for many years, but since she and Tipsy are both clairvoyants, Tipsy can "talk" to Granna in her head. There's a trick to creating a compelling character that is really only heard as part of Tipsy's inner monologue and only seen in memories. I had to make sure the plot device was clear and that Granna had a strong voice and presence of her own.

Gosh, that's a hard one! I think I'm a pretty good teenager-parent. Most parents of teens find it to be really challenging, but I actually prefer parenting teenagers. While of course, it was wonderful when they were little, I'm not really a "little kid person." Being a kindergarten teacher would be my nightmare! I have a great relationship with all three of my teens and I think this is where I'm doing some of my best parenting.

Why do you enjoy writing in the fantasy and paranormal genres?

All my work has some kind of speculative element to it. Honestly, probably just because I've always had a wild imagination. I prefer books, TV, and movies with speculative elements-- fantasy, the paranormal, dystopian, or magical realism. I also like historical books, TV, and movies. It's just far more interesting to me to read about things that could never happen, or things that happened in the past, or could happen in the future, than to read about people who are living normal, modern lives.

I just love to write, whether it be my own fiction or in my legal work. I love putting words together and crafting compelling stories and arguments. It's very satisfying to me. While I'm not a shy person, I prefer to communicate in writing because I like to plan exactly what I'm going to say. Looking back on my novels, I can definitely see how I was working through various issues in my own life while I was writing each one. At the time I'm not as aware of it, but it becomes clear in retrospect.

I didn't realize how brutal the publishing industry is and how much of a thick skin one must have to keep doing this!

I'm extremely busy, so I don't have a set routine, but I try to write for at least two to three hours per day. As for habits or quirks, I have to have my hair pulled back, and I can only write in Times New Roman 12 point, double-spaced font!

I'm working on the sequel to Charleston Green; working title, Haint Blue. It's the next chapter in Tipsy's life, about a year after the events of Charleston Green. Things are still really complicated for her! She's learning that the recovery process takes a lot longer than one thinks, post-divorce, and she's also taking on a new ghostly mystery!