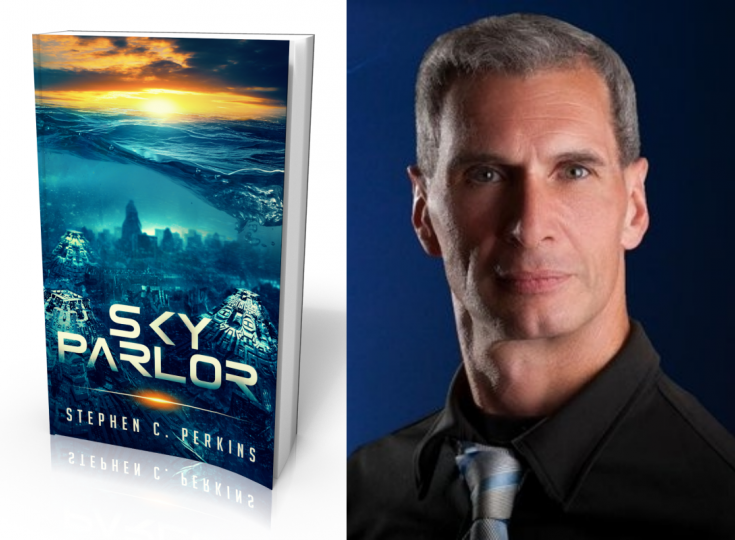 In less than two years as an independent author, Massachusetts native Stephen Perkins’ thrilling, entertaining and thought provoking novels Sorcerers’ Dynasty, Raging Falcon, American Siren, and Escape to Death have gained a loyal and rabid audience. As our Author of the Day, Perkins tells us all about his book, Sky Parlor.

Please give us a short introduction to what Sky Parlor is about.

Sky Parlor, my latest release – available at Amazon in both ebook and print formats, which are available now @ lulu.com/spotlight/RAGEOFWORDS for 20% off Amazon’s list price – is a unique science fiction/fantasy oriented adventure with elements of Greek mythology, reincarnation, as well as dystopian themes. The epic narrative spans centuries, and the characters introduced to readers in the first act, featuring a time period set during America’s Civil War, reappear in both the second and third act, centuries later in Sky Parlor, a futuristic dystopian setting. While living in Sky Parlor, the character’s dramatic interactions develop suspenseful scenarios - involving the concepts of spiritual reincarnation, politics, karmic revenge, and moral triumph – that lead to a most unexpected and thrilling denouement.

What inspired you to write about two ancient gods who made romance and waged war?

Mankind has always been fascinated and held in thrall to epic stories involving mythologies, stories which exalt humanity’s heroic sensibilities, even when things are at their worst. The fictional narrative of Sky Parlor was conceived with that tradition in mind, and presented to the reader with some exciting, engaging and unexpected twists and turns thrown in!

Tell us more about Desmond Starr. What makes him tick?

Desmond Starr is an ambitious, though somewhat naïve, young man living in the fictional and futuristic dystopian world of Sky Parlor, a world increasingly riven with growing tensions between organic humans and those humans who have decided to interface their consciousness, or spirit, with machines. Though fearful of the precarious political circumstances in which he finds himself embroiled, in the end, he discovers transcendent, and even heroic inspiration when he is stricken with a mystical vision from his distant past, a time during which – Starr becomes surprised to learn - he once lived as a pivotal and vital figure from American history.

For your book, you drew on Greek mythology. How did you approach taking centuries-old myths and telling them in a fresh way?

Sky Parlor features the story of a pair of immortal and ancient gods – Artemis and Apollonia - starring as protagonists and appearing in material form at various pivotal junctures in human history. But here too, as with Sky Parlor’s alternative account of the American Civil War, I utilized a bit of artistic license in their narrative conception. These are unique historical alterations that, to the perceptive reader, will become quite evident early-on in the story.

How much history did you weave into the story and how much research did that require from you?

With Sky Parlor, readers will be both surprised and thrilled to discover that, although certain familiar chronological accuracies have been adhered to as a result of the author’s extensive historical research, the concept of history, within the book’s narrative context, has largely been employed in the spirit of providing a dramatic and entertaining literary device. Beyond this however, some of the most perceptive readers – one is happy to have found - have even managed to discover what Sky Parlor reveals about the mythological significances which are often hidden at the chronological core of mankind’s recorded history.

Readers say your scenes are described in great detail. How did you pull this off?

I’ve found the powers of intuition and imagination are two of an author’s greatest assets, and with Sky Parlor, those pair of valuable tools helped to vividly bring to life the setting of the worlds created for Sky Parlor and, of course, the characters inhabiting those worlds.

The cover of Sky Parlor conveys an idea; what lies beyond human perception shapes history more significantly than that which has been made conspicuously apparent. This is also an opportunity to praise the highly-skilled designers at Damonza.com. When it comes to cover design, they truly are the very best in the business!

You describe your characters and scenes in great detail. Why did you find this important to do?

With Sky Parlor, I felt it was particularly important to create indelible, and even cinematic images in the readers mind. After all, as an author, one must always remember to show, rather than tell!

This book also touches on war and its devastating effects. What drew you to this theme?

If humanity has learned anything from the mythological aspect of history, it is this: without the experience of heroic struggle, the attainment of human progress is rendered virtually meaningless.

From my earliest memories, I’ve always known I was an artist. As John Lennon was rumored to have once said, “I’m an artist, give me a tuba and I’ll get you a melody out of it!”

What’s an aspect about being a writer you didn’t know about going in?

Before deciding to become a published author, I was not quite fully prepared for the extent of the marketing and promotional aspects. Thankfully, I’ve been able to surround myself with a capable team of diligent and experienced professionals. They’ve performed admirably in helping to build my unique book brand, including Eva Lancaster at thebookkhaleesi.com, who happens to be great with social media promotion!

Though this may sound unorthodox, but before I begin a new novel, I’m able to see the narrative, setting, and the characters in full cinematic and colorful bloom. From there, it becomes rather an elementary matter to merely describe to the reader what it is I’m seeing. While creating Sky Parlor, everything vividly came alive.

Readers can anticipate a new novel from Stephen Perkins, a science fiction/fantasy/mystery/thriller entitled Grand Masquerade, perhaps by the beginning of the 2019 Christmas season or, at the very latest, in time for the 2020 New Year!

After your readers have enjoyed Sky Parlor, they should not neglect to check out my other exciting titles, available at amazon.com/author/stephenperkins and at lulu.com/spotlight/RAGEOFWORDS! For a unique perspective on the news of the world that is surely not to be found anywhere else, everyone should go to my blog, Newsspellcom.org, the only source for real alternative news! Of course, readers can also find and follow me on Twitter, at [email protected]!