Steve Peek - Fascinated by Celtic Lore
Posted on 23rd of March, 2019 by Admin 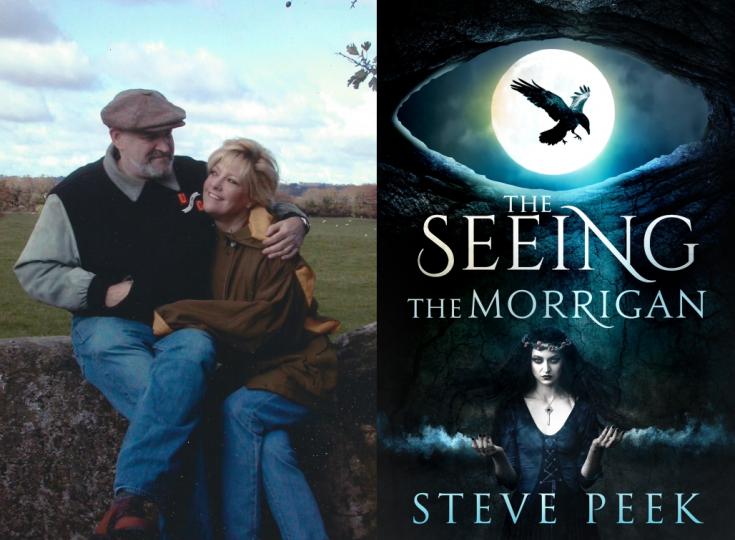 Steve Peek always wanted to be an author, with the trappings of bestseller novelists from the 1950’s. But life hitched him to a different plow, and he furrowed row after row until the world finished and spat him into old age. His thoughts returned to youthful dreams. He found himself facing a truth: writing, the act of placing and moving fingers on keys, were the things he needed. All along, he wanted to write. As our Author of the Day, Peek tells us all bout his book, The Seeing.

Please give us a short introduction to what The Seeing is about.

The story is about the power of belief. Meet the Victorian Era residents of Ireland’s remote, most western shore, Achill Island. They hold to the old ways, keeping alive legends of powerful mythic gods and magical creatures long banished in ancient battles of swords and sorcery. Centuries later, the Catholic Church placed the final lock on the gates of pagan exile. The rest of Europe is enlightened. They believe their ancestors’ religions as childish, stupid superstitions. Except on Achill Island. The people know what moves in the night. They see them, at least they think they do, and seeing. . .is believing.

Powerful storms hide the arrival of ancient gods and the hordes of monsters they conjure to clear the island of humanity. To return to former power, they must be seen, and so they begin their deadly campaign slowly, gradually spreading fear and belief until it becomes a terrifying wave rippling outward in all directions.

But something is wrong. Someone stands in their way. A girl who is not supposed to exist. A girl who unknowingly possesses dangerous paranormal powers. The girl must be destroyed before all men can be made to kneel before them.

It begins with a strange discovery in the bogs tempting Professor Branna Butler to the most western point and last bastion of belief in Irish lore. Branna has no idea her presence on the isolated island is preordained. Innocent, oblivious, to the dark powers bent on her death, she must first face and survive a dark, terrifying crucible to learn who, and what, she is.

Inspector Michael Doyle arrives to investigate a brutal double-murder. His visceral reactions to the horror of the killings place him on high alert. He is smitten the moment he meets Branna. Protecting her from the coming nightmare is his first priority, yet keeping her away ensures the victory of The Morrigan, the resurrected unholy trinity of pagan gods, and her legions from hell.

What inspired you to write about The Morrigan?

Celtic lore is irresistible to me. Always has been. While The Morrigan was known by many other names among the Celts all across Europe, she is essentially the same goddess: three sisters. The unholy trinity of pagan gods. Each sister may act independently but they are never more powerful than when they are entwined. Celtic myth has no shortage of tales about their mischief and horrors.

I found an old toy printing press in the basement of my grandmother's house when I was in the second grade. I wrote and printed a one-paragraph newspaper. The story was about a lost plastic soldier. By the time I managed to have a sheet that could be read, I and the basement were covered in gummy, dark-blue ink. Not only did I write, but at the age of seven, I self-published, an omen of things to come.

I took the sheet, hot off the presses, and ran upstairs to show it to my older cousin. He looked at it then said, "You did not use the letter "I" in the whole story. All these words are missing "I's."

"There were no "I's" in the box. All the other letters were there but no I's, so I just skipped them."

"Well, even if you had I's, lots of words are misspelled. You should fix it," my cousin said.

"Okay," I said, head down, my masterpiece destroyed. "I'll fix it tomorrow." I ran off to play and get away from my cousin. What did he know about publishing anyway? His name was Pat Conroy.

It is much harder than I ever imagined. Constant reading and research keep my books and my characters from being stupid.

It kills me, how people take what they know and criticize without checking facts. In The SEEING's opening chapter a character addresses Branna as 'Miss'. Someone downloaded the sample, reviewed the book and hammered it because the first use of Miss or Ms was in 1904 in a New England Newspaper. That may have been the first recorded use in America but Ms was common in English writing in the seventeenth and eighteenth centuries. So the book gets a bad review because the reviewer 'knew' the origins of Ms. It's a little thing, but I really research everything I write. But, you can never win an argument with a reviewer, so I try to write those peeves on a note and send them off with a balloon.

Where do your ideas come from?

Everywhere. It is important for me not to be insular. My ideas alone are not so hot. But when I read this book about 'A' and see this TV show about 'B' and makes a connection that creates makes me wonder about C and the research begins. A+B = C x 100k words.

I like to cook. I love my wife. My three rescue dogs and Betty, the cat, who will be twenty years old this July.

Why did you pick Achill Island as the backdrop for your book?

I spend some time there on more than one occasion. It was the last place where people would talk openly about faeries and sidhe and the gentry and such. The old beliefs don't just linger on this remote island which is Ireland's most western point, they live in the people of the place. On one of his many stays on the island, W.B. Yeats wrote, "Everything exists, everything is true and the Earth is only a little dust under our feet." That expresses the power of the place.

Tell us more about Professor Branna Butler. What makes her tick?

Branna Butler is the oldest daughter of one of the wealthiest and most powerful families in Ireland. Her mother wants her to find a wealthy man from a good family and settle down. Her father understands Branna is quietly willful and encourages her to be the second female to attend Trinity University in Dublin. She is fiery and independent, smart and not easily manipulated. When she first meets Inspector Michael Doyle, she is attracted to him, but there is no head-over-heals. He is smitten by her and after holding himself back because of the difference in their life stations, cannot help but try protecting her when The Morrigan lands on the island.

What fascinates you about Celtic lore?

By the time the Catholic Church came to Ireland in force, some of the earlier zeal and fire to stamp out local pagan gods were gone. The Church established a strategy for converting pagans to Christians. It was called lying, saying whatever necessary to move the locals from one god to their God. So the people pretended to accept the Catholics and, on the surface, everything was calm. This easy adaptation by the local pagans allowed the monks to actually record Celtic lore instead of destroying it. Hence, much is available to study. Another area of interest is American Indian lore. In my first book, Otherworld, I compare Celtic and Native American lore's similarities.

I am lucky. If I write long enough so it is necessary for characters to have to talk to each other, they get to talking and the story begins to tell itself. My characters are always changing the story. Sometimes I disallow it, but others, make me think the characters are a lot better at this writing stuff than I am.

My characters are created out of necessity for the story. Again, I research historical figures who had this or that in common with a character. After a while, they kind of build themselves.

My characters hate outlines and synopses. They seem to wait to take control and teach me not to waste time on them. They and I do respect the plot.

Some days I am at the keyboard at seven AM and stay there until seven PM. Some days, I never seem to make it to the computer. I try to write something every day, even it's only five hundred words. The most important thing is that whatever I write, I want them to be good words.

A novel about my grandmother who owned the house with the basement where Pat Conroy and I spend a lot of childhood time together.

or ask me at [email protected]