Wendy Holden - The Stories of Three Babies Born in Nazi Death Camps
Posted on 2nd of May, 2019 by Naomi Bolton 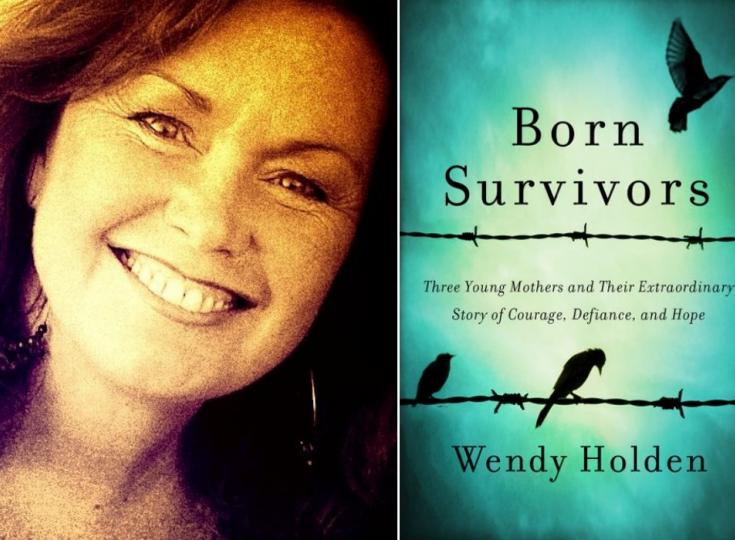 Wendy Holden, also sometimes known as Taylor Holden, is an experienced author and novelist with more than thirty books published, thirteen of which are bestsellers. She has also had numerous works transferred to radio and television.  As our Author of the Day, Holden tells us about Born Survivors, her book based on a true story out of WWII.

Please give us a short introduction to what Born Survivors is about.

Born Survivors tells the true story of three young mothers who hid their pregnancies from the Nazis and gave birth in the camps. Incredibly, all three mothers and babies survived and this is the first time that a book has been written about any infants who survived the Holocaust. It has now been published in 22 countries and translated into 16 languages, winning awards and inspiring many.

What inspired you to write about three babies who lost their fathers to the Nazis?

In 2013, I read an obituary of a woman who’d died in her 80s and whose newborn baby had been taken away and murdered in Auschwitz. This made me wonder if any babies could have survived the concentration camps and my research led me to one who had. She in turn led me to two others. It staggered me that nothing had been written about them before and, with their full cooperation and blessing, we have now honoured their mothers for perpetuity.

Tell us more about Priska, Rachel and Anka - what makes them so special?

They were young and beautiful, energetic, fun and hopeful of a bright and happy future - until the Nazis invaded their countries. Even under occupation, they fell in love and married and became pregnant, believing that the war would end any day. Sadly, it didn’t and they were each sent to Auschwitz two months’ pregnant where Dr Josef Mengele, the ‘Angel of Death’ asked them if they were pregnant. Not knowing if their answer might save them and their unborn infants or condemn them to death, they each denied their condition and were selected for slave labour rather than the gas chambers. For the next seven months, as their weight dropped dramatically and they were almost starved and worked to death, they kept their pregnancies secret, praying that the war would end before they were exposed by giving birth. It didn’t and they each gave birth to sickly 3lb babies in unspeakable circumstances - only to be despatched to one of the most notorious camps for extermination. Incredibly, luck and fate intervened. We can’t identify with six million dead, but we can identify with three young mothers.

When I first came across the story I only had 18 months until the 70th anniversary of the mothers' liberation and the baby's 70th birthdays so I did nothing else for the next 18 months, travelling to every country involved, speaking to survivors in America and across Europe, and researching archives in museums all over the world. I also had to read more than forty books on the era and immerse myself in the lives of these three women.

Discovering aspects of the women’s lives that even their children didn’t know about, and finding such treasures as a father’s handwritten letter and signature for a daughter who had never had the chance to meet him. I also found a short cine film clip of one of the babies in the arms of her mother at the liberated camp. That kind of find is any researcher’s dream.

I paint watercolours and oils, I am a garden designer, and a markswoman with a pistol and at clay pigeon shooting

You also recently re-released The Sense of Paper as an ebook. Tell us more about this.

This was my first novel, which was partly autobiographical, about a former war correspondent turned author, who is haunted by her worst journalistic experiences. She turns to the history of paper and the materials of JMW Turner to distract her from the ghosts of her past. Her research brings her into contact with Alan, a highly successful artist and Turner scholar. She falls under his seductive spell, only to discover that he has ghosts of his own. It is a book rich in history and war, love and obsession, yet intertwined with a thriller’s mysterious undercurrent, designed to wrong-foot the reader time and again.

In which way is this book different from Born Survivors?

The Sense of Paper is a modern day tale of obsession and psychological trauma, while Born Survivors is a historical biography of three ordinary people caught up in unspeakable horror.

This one was your debut novel. What surprised you most about readers' reactions to it?

I was touched and amazed by the reviews, which were so heartwarming. Publishers Weekly said it was "A superior novel of suspense in a well-plotted fiction debut." Booklist described it as: “A lusciously textured novel of suspense and discovery, full of emotional nuance as accurately and delicately rendered as Turner's clouds.” Mystery News said: "Every once in a while I pick up a book by an author totally unknown to me, a book for which there has been no buzz, no recommendation from a friend. Perhaps it’s the cover or the title that influences me to choose this one over that. Maybe it’s just kismet. Whatever it was that drew me to this book, I am forever grateful… [Taylor Holden’s] writing is exquisite—rich and textured… What Holden has done so supremely well… is blend in the rather obscure information about the art of papermaking and the influence this “simple” material had on the artists who used it. This is not a novel that drops in somebody’s latest hobby; this is a fine character-driven suspense story that envelopes the reader in a world where passions run deep and hope and life is renewed. It’s books like this one that keep me coming back every time...I have the eternal hope that there is another gem like this out there that I may just stumble across when least expected….”

What fascinates you about war?

I grew up in a family that had been deeply affected by war. My father fought the Japanese in Burma and my mother’s 18-year-old fiancee was killed parachuting into the Rhine. I was a war correspondent for the London Daily Telegraph and have written many books about remarkable women in war. What I look for is the humanity in the inhumanity and I am also fascinated by the nature of courage. In wartime people often find courage they never even knew they had when faced with injustice or cruelty.

Every day I get up excited about what I am going to write. I have never once suffered from writer’s block. In fact, I have the opposite problem. Words pour out of me and my hardest job is then having to pare them down to distill the essence of the story. I also loved to teach creative writing, which I do in Italy and the UK each year and - soon - from my home via Skype. I do a lot of public speaking also, which is very rewarding, especially when talking in schools to the next generation about compassion and tolerance.

I am very disciplined and work from 12-7 every weekday and 3-6 at weekends so as not to lose the thread. If I am up against a deadline then I often work through the night, which seems to be my best time for thinking and crafting.

I am starting a new detective novel, which is a complete change for me, set in my rural coastal county of Suffolk, England. I am so excited about the character I have come up with and the plot and hope it will become the start of a series. I am also writing another wartime memoir, set in Warsaw during the resistance, and have plans for a Holocaust novel too.

I have two new books out this year, which are also about remarkable and inspirational women. One Hundred Miracles: A Memoir of Music and Survival tells the story of world famous musician Zuzana Ruzickova who grew up in 1930s Czechoslovakia dreaming of two things: Johann Sebastian Bach and the piano. But her peaceful, melodic childhood was torn apart when, in 1939, the Nazis invaded. Uprooted from her home, transported from Auschwitz to Hamburg to Bergen-Belsen, bereaved, starved, and afflicted with crippling injuries to her musician's hands, the teenage Zuzana faced a series of devastating defeats. Yet with every truck and train ride, a small slip of paper printed with her favourite piece of Bach's music became her talisman. Armed with this `proof that beauty still existed', Zuzana's fierce bravery and passion ensured her survival of the greatest human atrocities of all time, and would continue to sustain her through the brutalities of post-war Communist rule.

A Woman Of Firsts: The Woman Who Built a Hospital and Changed the World is the memoir of Edna Adan Ismail, known as ‘The Mother Theresa of Africa’ who endured imprisonment, mutilation, persecution and civil war. The daughter of Somaliland's best loved doctor, she saw firsthand how poor healthcare, lack of education and ancient superstitions had devastating affects on her people, especially its women. And when she suffered the trauma of FGM as a young girl at the bidding of her mother, she experienced it for herself. Vowing as a child that she would one day become a nurse and build a hospital for women, Edna was the first girl from her country to be educated in Britain, its first midwife to practice, its First Lady, and first female Cabinet Minister. Having retired from a senior position in the World Health Organisation where she campaigned tirelessly for women's rights, she built her hospital, brick by brick. At 82 years old she still works there training future generations. And yes, she still delivers babies.