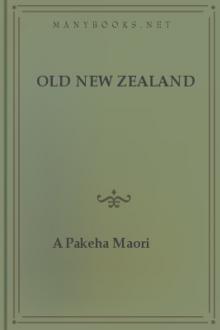 To the English reader, and to most of those who have arrived in New Zealand within the last thirty years, it may be necessary to state that the descriptions of Maori life and manners of past times, found in these sketches, owe nothing to fiction. The different scenes and incidents are given exactly as they occurred, and all the persons described are real persons.Contact with the British settlers has of late years effected a marked and rapid change in the manners and mode of life of the natives, and the Maori of the present day are as unlike what they were when I first saw them as they are still unlike a civilized people or British subjects.

fety; I mean the appearance of courage. If you have this, you may drive the world before you. As for real courage, I do not believe there can be any such thing. A man who sees himself in danger of being killed by his enemy and is not in a precious fright, is simply not courageous but mad. The man who is not frightened because he cannot see the danger, is a person of weak mind--a fool--who ought to be locked up lest he walk into a well with eyes open; but the appearance of courage--or rather, as I deny the existence of the thing itself, that appearance which is thought to be courage--that is the thing will carry you through! get you made K.C.B., Victoria Cross, and all that! Men by help of this quality do the most heroic actions, being all the time ready to die of mere fright, but keeping up a good countenance all the time.

Here is the secret--pay attention, it is worth much money--if ever you get into any desperate battle or skirmish, and feel in such a state of mortal fear that you almost wish to be s

Old New Zealand: A Tale of the Good Old Times

bokemom
5
Love it, this is the old guy at the bar that you buy a beer and spend the rest of the evening sitting at his knee listing to his stories in rapt attention. For when this was written(1863), it manages to miss the whole I'm an awesome white guy attitude, and when it does creep in, he catches and pokes fun at himself over it. The author has a respect and understanding of the culture he's joined that's hard to find in modern writing. His ability to see the value in their traditions and morn their passing as European contact grows makes this book a great read.
08/23/2010