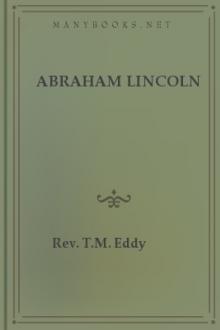 Delivered at a Union Meeting, held in the Presbyterian Church, Waukegan Illinois, Wednesday, April 19, 1865, the day upon which the funeral services of the president were conducted in Washington, and observed throughout the loyal states as one of mourning.

slavery. They were in sympathy with rebellion, but wore the semblance of allegiance and with consequential airs assumed to dictate the policy of the President. He was greatly embarrassed. He made them every kind and conciliatory offer, but all was refused. Slavery on the gulf and on the border, in Charleston and in Louisville, was the same intolerant, incurable enemy of the Union. He struck it at last. The Proclamation of Emancipation came, followed in due time by the recommendation that the Constitution be so amended as forever to render slavery impossible in State or Territory. For these acts, he was arraigned before the American people on the 8th of last November, and received their emphatic approval.

In a letter written to a citizen of Kentucky, the President gave an exposition of his policy so transparent, that I reproduce it in this place. It is his sufficient explanation and vindication.