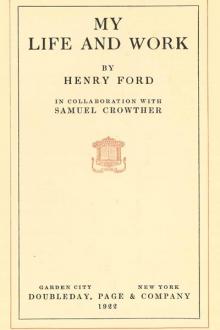 Written in Collaboration With Samuel Crowther.

Doubtless our order will merge by degrees into another, and the new one will also work--but not so much by reason of what it is as by reason of what men will bring into it. The reason why Bolshevism did not work, and cannot work, is not economic. It does not matter whether industry is privately managed or socially controlled; it does not matter whether you call the workers' share "wages" or "dividends"; it does not matter whether you regimentalize the people as to food, clothing, and shelter, or whether you allow them to eat, dress, and live as they like. Those are mere matters of detail. The incapacity of the Bolshevist leaders is indicated by the fuss they made over such details. Bolshevism failed because it was both unnatural and immoral. Our system stands. Is it wrong? Of course it is wrong, at a thousand points! Is it clumsy? Of course it is clumsy. By all right and reason it ought to break down. But it does not--because it is instinct with certain economic and moral fundamentals.

Rob Reader
4
Henry Ford was born in a small village and was molded by his parochial rural origins. Despite this humble origin and his lack of a higher education he essentially invented the mass produced automobile and changed the face of America with his invention. This book however is far more than an account of his industrial enterprise but gives a broad spectrum of his ideas on almost all aspects of society, the economy, international affairs, labor problems and government aid programs.
His most peculiar views and most obvious prejudices appear to concern bankers and Jews. He was famously and virulently anti-Semitic, had little respect for blacks, Catholics and other minorities and although this is minimized in his book his bigotry seemed deep seated and endemic. Again this may be the result of his small town waspish upbringing but for a man of his obvious intellect one would have thought he would hold these ideas within himself rather than make millions of enemies by publishing them in his Deerfield newspaper and in abbreviated fashion in this book.
Despite the above mentioned flaws in Mr. Ford\'s personality I found the book interesting, informative and instructful. When men who achieve so much hold ideas so petty it can only make us wonder as to the nature and value of genius.
I give this work four stars largely because it not only tells much about the mind and soul of Mr. Ford but also about his unresolved internal struggle.
03/08/2012

Jonathan Grudin
3
This interesting book would undoubtedly have fared better did it not include a short, extremely vicious anti-semitic diatribe. The book includes nice stories of Ford's early career and detailed discussion of all aspects of his approach to invention and manufacture, including a strong focus on iterative, customer-centered design. His approach is much governed by a clearly deep sense of the important of service to others. He then takes on a range of the world's problems as of 1922 -- war, charity, titles, welfare, financiers, unions (he opposed all of them). Although I only agree with a small fraction of Ford's worldview, I found it consistently thought-provoking, because he had thought everything through. Later in life Ford publicly recanted his anti-semitic fulminations. They seem somewhat out of synch with most of his philosophy so it isn't clear where they came from. Keep in mind that the book was written before Ford was forced to abandon some of the other principles espoused in the book, such as preventing Ford Motor Company employees from unionizing.
01/25/2008