The Romance of Words

The Romance of Words
4th edition 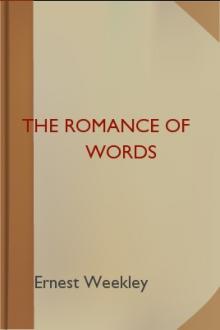 The Romance of Words
4th edition

A long and somewhat varied experience in language teaching has convinced me that there are still, in spite of the march of science, many people who are capable of getting intellectual pleasure from word-history. I hope that to such people this little book, the amusement of occasional leisure, will not be unwelcome.

, except in phrases beginning with the preposition for. See also bead (p. 74). Unkempt, uncombed, and uncouth, unknown, are fossil remains of obsolete verb forms.

In addition to these main constituents of our language, we have borrowed words, sometimes in considerable numbers, sometimes singly and accidentally, from almost every tongue known to mankind, and every year sees new words added to our vocabulary. The following chapters deal especially with words borrowed from Old French and from the other Romance languages, their origins and journeyings, and the various accidents that have befallen them in English. It is in such words as these that the romance of language is best exemplified, because we can usually trace their history from Latin to modern English, while the earlier history of Anglo-Saxon words is a matter for the philologist.

Words borrowed directly from Latin or Greek lack this intermediate experience, though the 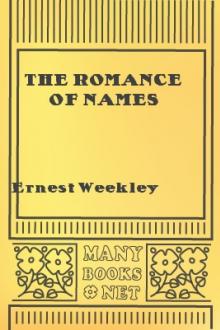 The Romance of Names