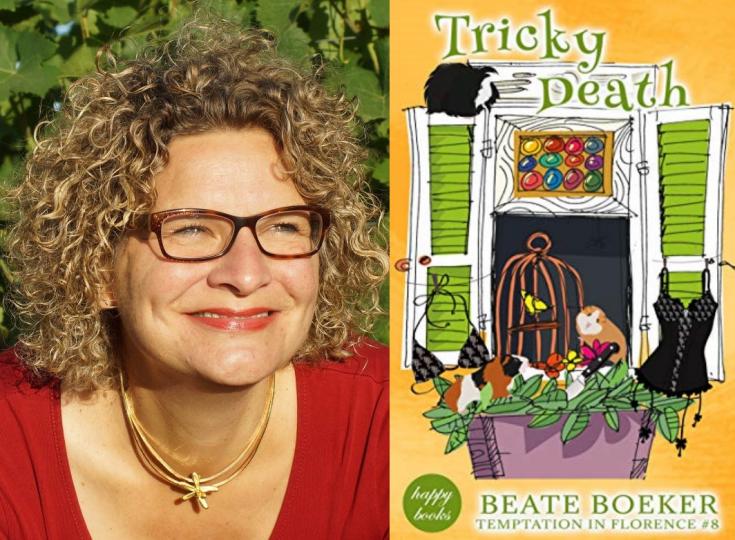 Beate Boeker is a USA Today bestselling author with a passion for books that brim over with mischief & humor. She writes cozy mysteries and sweet sophisticated romantic fiction, many of them set in beautiful Italy. Her novels were shortlisted for many awards (Golden Quill Contest, the National Readers' Choice Award, Best Indie Books). She's got a degree in International Business Administration and works as a marketing consultant. Widely traveled, she speaks German, English, French, and Italian and lives in Germany together with her husband and daughter. While 'Boeker' means 'books' in a German dialect, her first name Beate can be translated as 'Happy' . . . and with a name that reads 'Happy Books', what else could she do but write novels with a happy ending? As our Author of the Day, she tells us all about her book Tricky Death.

Please give us a short introduction to what Tricky Death is about.

Tricky Death is a cozy mystery set in Florence, Italy. The heroine is called Carlina and has a lingerie store in the historic town of Florence, called Temptation. Her husband Stefano works at the homicide department. This series is particularly charming due to the zany Italian family who is always bubbling over with new ideas and wild schemes. Never before has a case been as tricky as this: The newlywed husband of Carlina’s cousin is found drunk and unconscious in the arms of a dead prostitute. He claims he has no idea how he got there, but even his wife doesn't believe him.

Commissario Stefano Garini is forced to investigate this case, and though he believes Lucio has been framed, he can’t find the evidence he needs. On the contrary, every new clue seems to provide proof that Lucio is the murderer. On top of that, old Aunt Violetta and Uncle Teo have come up with a new business venture that keeps the Mantonis busier than ever: Guinea pig racing!

What inspired you to write about a newlywed husband who is found unconscious in the arms of a dead prostitute?

I wanted to start with a desperate situation, where nobody would believe that Lucio was innocent.

Tell us more about Stefano Garini. What makes him tick?

Stefano became a policeman because he believes in justice. He's straight-forward and rather enigmatic at most times, but he fell in love with Carlina who unfortunately comes attached with a crazy family that's willing to bend the law as it sees fit. That's why he's often torn in two between his loyalty to his in-laws and his own ethical standards.

Why did you decide to throw guinea pig racing into the mix?

Georgette Heyer, one of my favorite authors, once introduced a young man who bet on a race between a spider and a cockroach. I thought that was hilarious, and so I adapted the concept, working with animals that are a bit cuter, so people could relate to them. Besides, Aunt Violetta had a rather unique business idea the two previous books (no telling!), and I had to find something that was even crazier.

Nothing secret - I'm pretty transparent :-). I love to learn new languages. I'm German but I speak English, French, and Italian. I'm also a marketing consultant and help businesses to become more visible. Often, I not only do the concepts and brainstorming, but I also help with the realization and write the texts for their websites and brochures as well. And I'm currently learning all about motor yachts because we're planning to buy one to live on it (at least partially).

This is the eight book in your cozy mystery series, Temptation in Florence. Can it be read as a standalone? How do the other books in the series tie in with this one?

Tricky Death can be read as a stand-alone because all characters are explained and the plot barely refers to previous books. Each mystery is solved, there are no cliff hangers from one book to the next. However, the relationships within the family and of course between Stefano and Carlina develop throughout the series.

Why did you pick Italy as the backdrop for your stories?

I fell in love with Italy when I first came to the country years ago, and I've always said that the stork who was supposed to deliver me got re-routed by a storm and ended up in Germany instead. As I didn't have the money to travel there as often as I wished, I decided to dream myself to the country where I wanted to be ...

What did you have the most fun with while writing this book?

The guinea pig race was really a lot of fun. I love it how the Mantonis get distracted all the time and manage to create so much chaos while remaining so lovable.

I decide who's the victim and who's the murderer. Next, I plan the red herrings. I also try to weave different strands of action together that usally come together at the time of the murder.

As I'm quite busy with my consultant business, I only write at the weekends. I usually need 1.5 hours for 1000 words, and a full book is usually around 60,000 words.

I'm busy translating Tricky Death into German. Next month, I'll write a new series called "Murder in Viareggio". This is a book that will first appear in German and not in English - a first for me!