Blair Denholm - Justice Served With a Side Order of Vengeance
Posted on 10th of August, 2021 by Naomi Bolton

BLAIR DENHOLM is a crime fiction writer who has worked in New York, Moscow, Munich, Abu Dhabi, and Australia. He voted in a foreign election despite having no eligibility to do so, was almost lost at sea on a Russian fishing boat, and was detained by military forces in the Middle East. Denholm’s debut crime novel, SOLD, is the first in a thrilling noir series featuring the detestable yet lovable one-man wrecking ball Gary Braswell. The next book in the series, Sold to the Devil, is getting rave reviews from readers all around the world. His current project, a new series called The Fighting Detective, features hard-boiled London cop, DI Jack Lisbon, who gets into a world of trouble without even trying. He often relies on the skills he learned in the boxing ring to get things sorted, but he’s got a good heart and only wants to see the bad guys punished for their crimes.  The prequel novella, Fighting Dirty, is available FREE on Amazon, and has ranked at #1 for the following categories: Heist Crime, Vigilante Justice, and Hard-Boiled Mysteries. Join the thousands who have downloaded the story to see why Jack Lisbon is a crime fiction hero to keep an eye on! As our Author of the Day, he tells us all about the second book in the Fighting Detective series, Shot Clock.

Please give us a short introduction to what Shot Clock is about.

Shot Clock is the second full-length novel in my police procedural series, The Fighting Detective. Detective Sergeant Jack Lisbon is working his second big case in Australia, having immigrated after a dubious exit from the London Metropolitan Police a couple of years ago. The action starts with the brutal hit-and-run murder of a famous sports coach, and soon Jack’s embroiled in the world of professional basketball.

After years of waiting, the struggling Scorpions basketball franchise is finally knocking on the door of its first-ever championship title. The community of Yorkville is united behind the home team, spirits are high. But with the playoffs in sight, their coach Dale Collins is mowed down in broad daylight. The killers leave no trace – no DNA, no prints, no clues, nothing. Ex-boxer DS Jack Lisbon and his partner DC Claudia Taylor must unravel dark secrets and long-standing grudges to peel back the layers of this baffling mystery. If those obstacles aren't enough, Jack has to battle his own personal demons that threaten to cripple him at every turn. 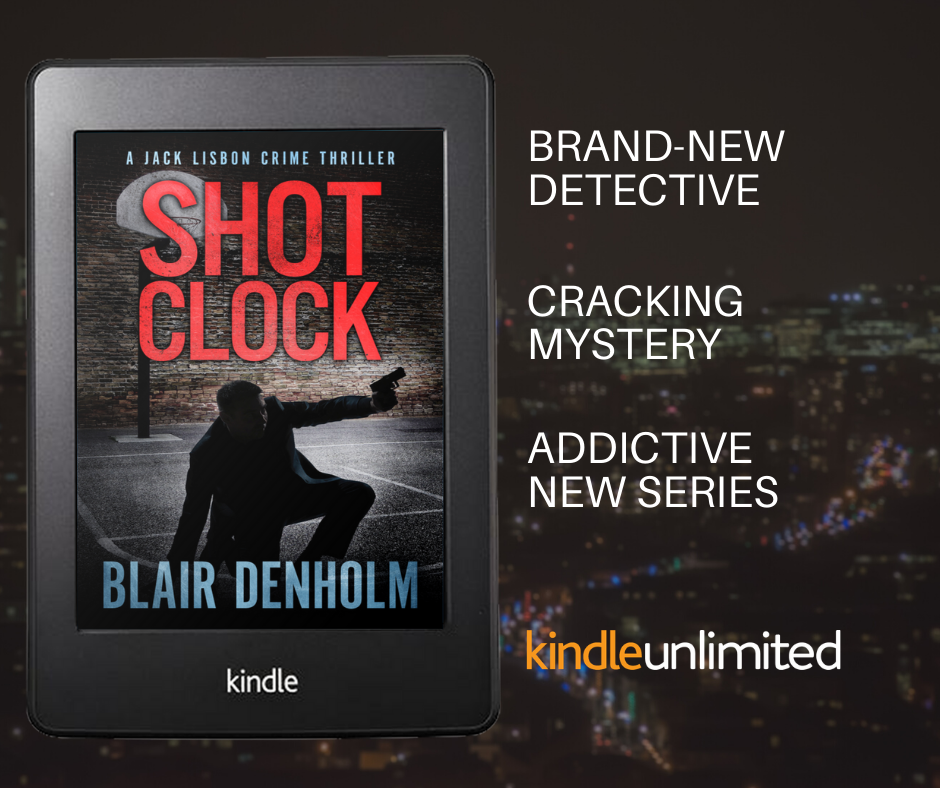 Why did you use a hit-and-run and the murder of a famous sports coach as the catalyst for your story?

With Jack being an ex-boxer and the first novel, Kill Shot, revolving around pro fighting, I struck upon the idea of setting each novel in a sports environment. Having played basketball to a high level as a younger man (I even represented my Australian state, Queensland, where the Jack Lisbon stories take place), turning to hoops was a no-brainer. Leveraging my love and knowledge of all kinds of sports to flavour my stories is a pleasure.

Tell us more about Detective Jack Lisbon.  What makes him so special?

Jack’s got a dark past that no one knows about. You have to read the prequel, Fighting Dirty, to know exactly what that is (it’s a permanently free book on Amazon, if any of your readers want to grab a copy), although it is hinted at in other books. He’s got a daughter in the UK whom he cannot see, an ex-wife whom he can’t stand, and a crush on his partner, Claudia Taylor, that he’s not sure will ever amount to anything. He’s a recovered alcoholic and ex-smoker who is, so far, keeping those excesses at bay. In fact, he’s turned up the intensity on his training and is evolving into a lethal specimen of a man. He did relapse in the first novel with a drinking binge, but so far after that, touch wood, he’s been a good boy. He’s not averse to using physical methods to get information out of suspects or himself out of a pickle. His motto is: fists come in very handy when your pistol jams.

Why did you pick the small community of Yorkville as the backdrop for your story?

My first series, Game Changer, was set in real places with real names. My view used to be, why make them up when there are awesome actual places to draw upon? And now, for some unknown reason, I’ve gone and realigned my thinking. Yorkville is a fictional medium-sized city in the steamy tropics of Northern Australia. Aussie readers will identify with it, I think, and those from other countries will enjoy the exotic feel of a city that has crocodiles living in the river that bisects it. The name itself is a portmanteau of two real locations in Queensland: Cape York and Townsville.

I speak and write fluent Russian. It’s not a real secret, as I’m a translator when not writing. I guess a secret skill I pull out occasionally is my ability to mimic foreign accents. I’m toying with the idea of voicing my own audio books one day.

This is book two of a series.  Can it be read as a standalone? How do the other books in the series tie in with this one?

I endeavour to make all my books readable as standalones. Each case Jack and his team investigate is a separate story, although there are events referenced from one book to the next. Those who follow the series will enjoy those elements, but for folks who pick up a Jack Lisbon book at random won’t notice them. I know this because I’ve had reviews of all three books by readers who have only read one and enjoyed the novel as a standalone. Having said that, some reviewers have then gone on to read the other books. To cut a long story short, you can read them in any order you like and it won’t impact on your appreciation of the series.

Readers say this book is well-paced and really action-packed. How did you pull this off?

I pulled this off by asking my readers to say these complimentary things! Seriously, though, it comes from lots of practice and reading widely. I keep my chapters fairly short and like to end each chapter with a mini cliffhanger. My sentences aren’t long rambling walks through the countryside, and I don’t dwell too much on describing the furniture or what every character is wearing. Keeping things sharp and focused is the key, especially in crime fiction. I had an editor once who schooled me on the sins of “overwriting”. Her lessons have proved invaluable to me. I also love dialogue as a fantastic device for driving a narrative forward.

Do you plan out all of the twists before you start writing, or does some of it just "happen" along the way?

I generally tend to be a “pantser”, an author who writes by the seat of their pants. I’ve tried the planning and plotting approach, but it doesn’t work as well for me as it does for other writers. The twists come towards the end of the story generally. In fact, I might be three-quarters of the way through a novel and start to panic – where’s the twist coming from? But then, out of the blue, it will come to me.

My writing habits are terrible and I would not advise any aspiring authors to emulate them. My discipline is terrible. I’m haphazard in my approach, grabbing an hour here, half an hour there. Also, I am a terrible procrastinator. Yet somehow I’ve managed to crank out three full-length novels and a novella in less than a year. The problem is, my aim was to have had six done already! My dream is to give my full-time job the heave-ho as soon as I can so there’s more time in the day to procrastinate…I mean write.

I’m working on Book#4 in The Fighting Detective series, Shot to the Heart. Jack goes back to London to see his daughter, but there’s trouble waiting for him.

Away from Jack Lisbon, in November I have a completely different type of crime novel coming out. It’s called Revolution Day, set in Moscow in 1987 on the even of the 70th anniversary of the Russian Communist Revolution. It’s the novel I’ve always wanted to write and I cannot wait to launch it. I’m thinking of serializing the hero, jaded Militsiya investigator Viktor Voloshin, and creating at least three novels with him as the star. Keep your eyes peeled. 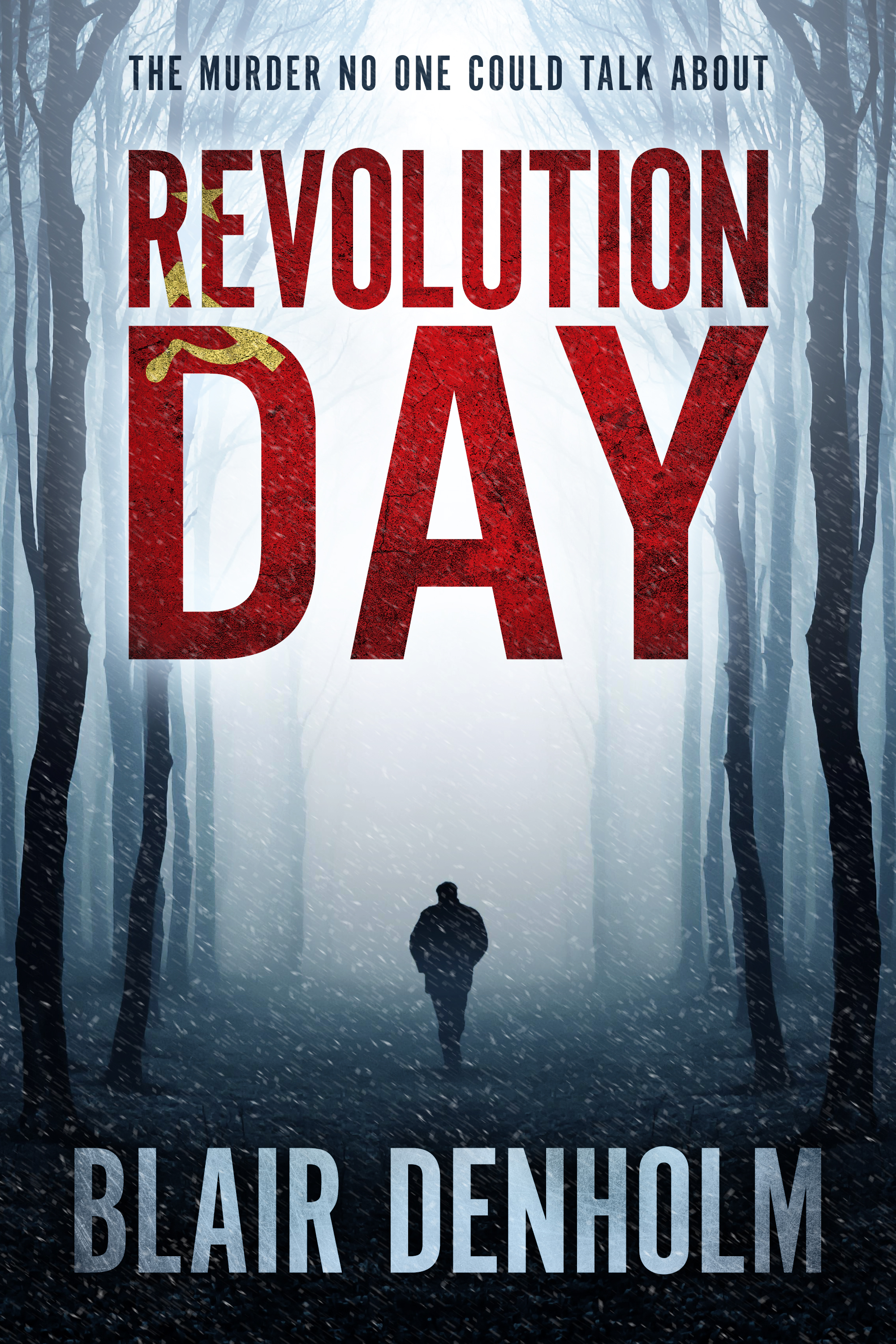 One of my favorite places for me to interact with readers is my private Facebook page called Blair’s Den. You can also catch me on Twitter, and follow me on BookBub, Facebook and Amazon. Finally, you can head over to my website and sign-up for my newsletter. I often run giveaways and competitions, so it’s worth joining! Links below.