C.A. Szarek - Risking it All for Happily Ever Afters

C.A. Szarek - Risking it All for Happily Ever Afters
Posted on 27th of September, 2020 by Naomi Bolton 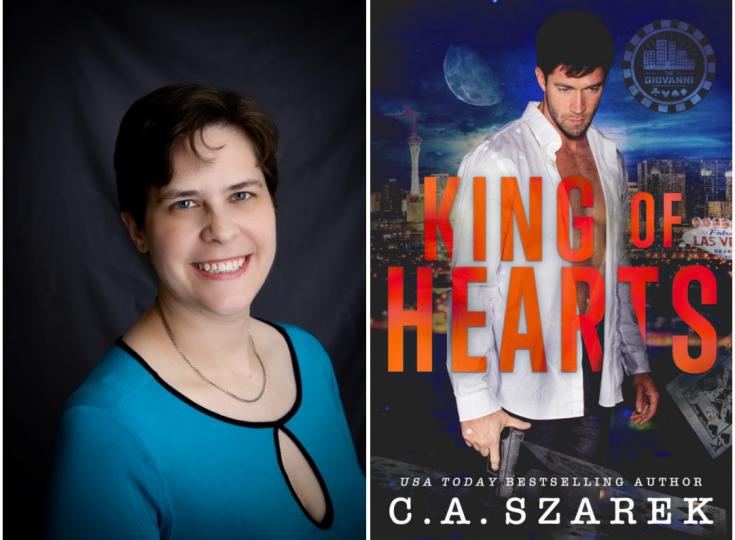 USA Today Bestselling, award-winning author of romantic suspense and epic fantasy romance, C.A. loves to dabble in different genres. If it’s a good story, she’ll write it, no matter where it seems to fit. She’s a hopeless romantic and always will be. Risking it all for Happily Ever After is what she lives by! As our Author of the Day, she tells us all about her latest book, King of Hearts.

Please give us a short introduction to what King of Hearts is about.

King of Hearts is the first of 4 books. It is a series about a family that owns a casino (I made up) on the Vegas strip. There are 4 siblings, and the first book is about the eldest, Gio. His name is Nico Giovanni (The casino is named for the family). Everyone calls him Gio because he’s a cop, and he was nicknamed at work. He’s sort of the “black sheep” of the family since he’s not in the family business.

His story is about when an old flame of his comes into town and disrupts his life. It’s fun, because it’s an enemies to lovers story, with a secret baby!

Why did you decide to feature ex-lovers in this one?

I love when the couple has a history. It’s so much fun to write the banter, especially if they don’t like each other, or if they ended badly, like these two. It’s even more fun (arguments and banter) if there’s a secret, like with these two. I LOVED writing the scenes that have tension. Also, they don’t have to wait long to jump in the sack, if they have a history, LOL. The relationship chase is way more complicated and fun to work out.

Tell us more about Nico Giovanni. What makes him tick?

Gio is definitely an alpha male, used to things going his way. He’s the oldest of 4, so he also has the big brother thing going for him, and he’s really close to his sister and brothers. He considers himself a simple guy, and he likes the ladies, but he’s always been hung up on Maddie, and has never gotten over her. Gio pretty much lives his job; he’s all cop. Solving murders drives him forward, closure for the families. He can be an a-hole from time to time, but he’s a good guy, with his heart in the right place.

What makes US Marshall Madison Granger so special?

Maddie is sweet and tough, and some would call her a spitfire. She’s used to the “boy’s club” mentality, since her chosen profession is male-dominated, but she’s never been afraid to rise to the top, showcasing her skills. She’s never afraid to speak her mind. She’s fierce when it comes to her family, and loves her son and her sister more than her own life. She never got over Gio, but she doesn’t want to admit that aloud.

I think I always felt like I was an author—I’ve been writing a long time. Since I was a kid, and I wrote my first book at 14, but never finished it. I wrote one when I was 17 and DID finish it, but I wasn’t published until 2013 (way older than 17, LOL). I think my defining moment of “validation” was 2017, when I hit the USA Today Bestseller list, but I have always felt like an author. When you write, you’re an author, even if it’s before you’re published.

My dreams. I often dream of my characters, and their stories. They always “introduce” themselves to me, including their names and jobs. Then the rest has to form organically for me.

I’m a die-hard pantser. That means I don’t plot at all. When I’m ready to start a new book, generally I know who the characters are, what they do for a living, and that they’re going to end up together. LOL. That’s it. I know, sometimes it’s a stretch, even for me. Sometimes I struggle, but I would prefer that to plotted. I’ve tried. Sometimes I type Chapter 1 and go with it, and sometimes I start elsewhere—if I’m feeling a particular scene. With King of Hearts, I “met” Maddie and Gio in a sex scene, of all places, so I wrote it. It was way down in the book. I knew it wouldn’t start the book, but that’s what I wrote first. So it just depends on the story, I guess.

I’m actually working on a few things right now, and I kind of go back and forth, depending on who’s “talking” to me. Neither of the books I’m working on are romantic suspense, LOL. I know I’m way behind the bell curve, but I’m working a wolf-shifter book, and the other project is really different for me—different from anything else I have out. It’s first person, present tense to start with, which is a shocker for me, since I don’t even like first person, but it’s just how the story happened for me. It’s paranormal as well, kind of an angels/demons thing. Ish. LOL.

I currently have 17 books out, in 4 different (ongoing) series, and they also cover different genres. I have all my books on my website, www.caszarek.com, and I’m on FB, Instagram and Twitter.