Caldric Blackwell - Uncovering the Secrets of a Mysterious Artifact

Caldric Blackwell - Uncovering the Secrets of a Mysterious Artifact
Posted on 18th of April, 2019 by Naomi Bolton 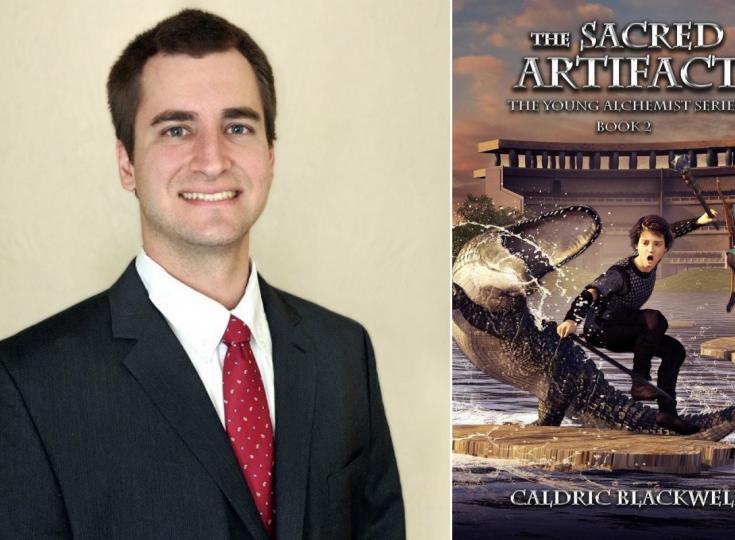 Caldric Blackwell was inspired to write while studying the works of great authors during his English coursework at university. He currently resides in southern California, where he gardens, plays a variety of string instruments, and works on his next easy-to-read children's fantasy novel. As our Author of the Day, Blackwell tells us all about his book, The Sacred Artifact.

Please give us a short introduction to what The Sacred Artifact is about.

“The Sacred Artifact” is the second and final book in a middle grade fantasy series, titled the Young Alchemist series. The plot revolves around a fourteen-year-old student alchemist, named Craig Pike, and his teacher, Cornelius, as they journey to uncover the secrets of a mysterious artifact. With the help of a quick-thinking archer, named Audrey Clife, they trek across dangerous lands, compete in a cutthroat tournament, and reunite with old friends.

What inspired you to write about a mysterious artifact?

The premise for the Young Alchemist series began with the idea of an alchemy student who is put in a position where he must rise to the occasion. The first book in my middle grade fantasy series, “The Missing Alchemist,” follows Craig on a quest to rescue his teacher. With the second book, I wanted to go a bit deeper into the world of the series, including the lore of alchemy, and a mysterious artifact was an intriguing, effective way to accomplish this. Additionally, I love history and enjoy reading about the discovery of ancient objects!

Tell us more about Craig Pike. What makes him tick?

Craig was one of my favorite characters to write. He is somewhat reserved and is hesitant to leave his comfort zone. His passion is learning alchemy, and although he is still early in his training, he applies himself and is a quick learner. He is extremely loyal to his friends and will rise to the occasion if they need him.

You studied the works of great authors during your English coursework at university. How did this influence your writing?

I think exposure to authors from a variety of time periods and genres was instrumental in the development of my writing! Although I do not have a specific author I try to emulate, recognizing the writing strengths of my favorite authors inspires me to improve the weaknesses in my writing. Additionally, seeing such a diverse collection of literature showed me how important it is to be creative with your writing. There are a lot of ways to accomplish what you want as a writer, and it’s okay to venture into new territory.

“The Sacred Artifact” is aimed at tweens and young teens. What appeals to you about this audience?

Great question! One of the reasons I like the middle grade fantasy genre is that it maintains a lot of the whimsical, imaginative nature of childhood. At the same time, because the audience consists of more advanced readers, there is more freedom with the writing. You can be quite descriptive and develop the characters more without worrying about losing the readers.

What do you hope your readers will take away from this book?

I’m not sure they qualify as “secret skills,” but I have a few different hobbies. Outside of working on my next middle grade fantasy novel, I really enjoy playing music. I mostly play guitar, bass, and keyboard. I recently bought a Korg Volca synthesizer and have been enjoying learning how to play it. I also enjoy outdoor activities, such as gardening and hiking.

What fascinates you about alchemy?

My favorite thing about alchemy is it’s a combination of science, history, and the supernatural. Medieval alchemists attempted feats, such as turning lead to gold, that was impossible at the time, but is possible now with particle accelerators. And of course the esoteric, supernatural aspects of alchemy have always interested me!

I really enjoyed writing the new characters. For instance, there’s a character named Captain Charla who is a boisterous, no-nonsense captain of a charter boat. She has a great sense of humor, so it was fun trying to capture her for the reader. Quintus is another character I enjoyed writing. He’s a wise alchemist with an interesting backstory. He plays an important role in “The Sacred Artifact,” so I wanted to do him justice.

I also had a lot of fun expanding the world of alchemy in this book. I laid a lot of the groundwork in the first book, so I was able to go much deeper in “The Sacred Artifact.” Readers get to see the birthplace of alchemy, and a lot more of the mechanics of alchemy are explained. Readers to get follow along as Craig learns about exciting topics, such as metallurgy.

There are some rules in the Young Alchemist world. I didn’t want the alchemists to be omnipotent; I wanted them to have weaknesses. Because Craig is a new alchemy student, he still has a lot to learn. So the reader gets to learn about alchemy and its rules alongside Craig.

One of the challenges with having alchemy as a plot device is maintaining a balance between its power and its weaknesses. In “The Sacred Artifact,” I want alchemy to be a formidable skill yet not be all-powerful. Additionally, as a middle grade fantasy novel, “The Sacred Artifact” must keep the target audience in mind. I can’t get too complicated with the plot or I’ll lose the readers.

I typically write in the evening. I like to review what I worked on the day before. Then I look at my outline to ensure I’m familiar with where the story is going. Finally, I start writing! For the first draft, I like to move as quickly as possible. I don’t want to interrupt my flow by getting too caught up with perfection in the writing. I work on improving the actual writing during the second draft.

I usually use time rather than words/pages for my daily goal. When I use time as my goal, I focus on doing the best writing I can during the allocated period. I have had word/page goals in the past, but I often ended up getting too fixated on reaching that quota, rather than doing my best writing.

I’m currently working on a novel set in New Orleans. It’s aimed at a young adult audience. The story draws from a lot of experiences I had while living there. It’s quite a change from my previous work because there isn’t a fantasy element. However, I’ve enjoyed being able to step back from world-building and focus on the plot and characters. It’s been a lot of fun working on it, but it has certainly been a transition. Stay tuned to my website (https://caldricblackwell.com) for updates on this new project!

Readers can find me on my website (www.caldricblackwell.com) and on social media! My books are listed on Amazon – each with a Kindle and paperback version.