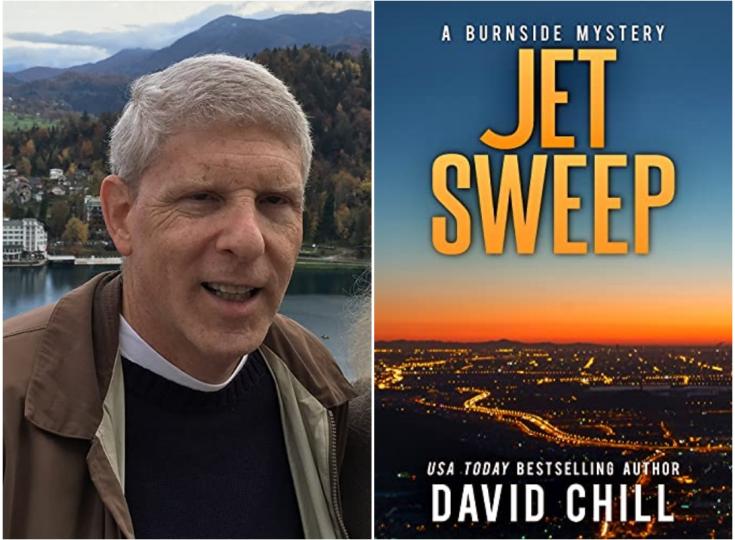 David Chill is a USA Today bestselling author and has written thirteen novels: Post Pattern, Fade Route, Bubble Screen, Safety Valve, Corner Blitz, Nickel Package, Double Pass, Tampa Two, Flea Flicker, Swim Move, Hard Count, Jet Sweep, and Curse Of The Afflicted. Post Pattern was given an award by the Private Eye Writers of America for best new first novel. The Burnside Mystery Series has received much critical acclaim. Born and raised in New York City, David received his undergraduate degree from SUNY-Oswego, and then moved to Los Angeles where he earned a Master's degree from USC. David Chill presently lives in Los Angeles with his wife and son.  As our Author of the Day, he tells us all about his book, Jet Sweep.

Please give us a short introduction to what Jet Sweep is about.

On the surface, this is a story about a shadowy figure who has lured P.I. Burnside into a plot to murder the founder of a startup company. But at its core, JET SWEEP is an exploratory about siblings, the twist being that one of them was adopted. There are other twists to the story, but I’d rather not give them away here.

I have always been fascinated by the subject of siblings and this is deeply personal for me.My brother was killed in a car accident at the age of 24. My first book, POST PATTERN, deals with sibling rivalry that does not end well. After much thought, I’ve concluded my focus on siblings is my way of coming to grips with my brother’s death – and in a way, to try and metaphorically bring him back to life.

Tell us more about P.I. Burnside. What makes him tick?

Burnside is a damaged person, something that began very early on. His father was killed in a car accident (!) before he was born, and his mother died from cancer just after he graduated from high school. Burnside received a football scholarship to USC, so USC essentially became his “family” after that. He has a strong moral streak, and a weakness for those who have been dealt a bad hand early in life. And it’s this desire to try and right past wrongs that often gets him into trouble.

What inspired you to use the world of startup companies as the backdrop for this story?

People who work at startup companies are typically young and freewheeling, and it offers a contrast to the way other people go about their workaday lives. It also allows for a contrast between Burnside’s old school way of doing things, with a younger generation that views the world differently. These contrasts allow for some interesting plot twists and dramatic character arcs to play out. That the founder of one of these startups, an electric scooter company, is at the center of this story also allows me to make it very topical. Anyone who lives in a large city like Los Angeles, has likely encountered these scooters -- for the better and for the worse.

I have had a long career conducting marketing research for a variety of large corporations. I developed surveys, moderated focus groups, and made a lot of presentations to senior executives. I am very good at analyzing large sets of data and boiling the results down to conclusions that others can easily understand. I like to refer to myself as being both left-brained and right-brained, meaning I tap into both the logical and creative sides of my mind. I try to be very balanced, and I think that has served me well as a mystery writer. In addition to the obvious need for creativity, I also have to develop a logical, well-thought-out plot structure.

Why classic Southern California noir mysteries? What drew you to this genre?

Southern California ia a marvelous setting. It is a region with an oversized amount of wealth, poverty, beauty, and sin. It is physically situated near both scorching hot deserts and snow covered mountains. And because it is the entertainment capital of the world, the region attracts a wide variety of people from all over the country – as well as from all over the globe. There is a lot of scenic beauty, but also a lot of personal despair, as people often move here expecting to become successful and lead a great lifestyle – something that does not always happen. And therein lies a great opportunity for dramatic expression.

Burnside is a man with issues. Why did you create him this way?

We all have issues, but Burnside’s rocky childhood allows me to place him into situations for which he is unprepared. As he grew up without a father, he has had to struggle to understand how to be both a good husband and a good father without much of a blueprint to guide him. He himself is taking baby steps, and learning along the way. Part of Burnside’s character development involves the challenges of seeing the good and the bad of how other people live. In so doing, he tries to sift through others’ successes and tragedies, in order to build a better framework for himself and his family to thrive.

Readers say the family interactions are very realistic. How did you pull this off?

My readers are very kind, and one of the most gratifying aspects of writing this series is hearing these types of reactions. I have drawn from my own experiences, which are not quite as severe as Burnside’s, but we both married to very intelligent women and have been blessed with wonderful sons. Some of Burnside’s interactions with, and feelings about, his son Marcus are related to some of my own experiences as a father. I’ve often said that for me, fatherhood was like walking through the fog – not always sure of the right thing to do, and hoping that each step forward would lead me to solid ground.

Vengeance, jealousy, and resentment are big themes in Jet Sweep. Why?

I think that many of us harbor a certain degree of envy and jealousy of others, although we rarely act on these. No one’s life is perfect, but in today’s world it sometimes appears that way. In creating good narrative fiction, having characters who are unrestrained from basic societal norms allow us to get a glimpse into a world that is very different from our own. Most people do not commit crimes of passion or violence or revenge, nor do we typically act upon our more base instincts. But being able to closely observe those who do makes for interesting reading.

The first thing I do is decide what the core issue is that I want to explore. I will be living with this story for many months, so this issue needs to be important to me. I will typically develop a number of key characters, and map out what I call a 24-point plot structure. This is basically 24 “events” that occur over the course of the story, and I can frequently develop one or two scenes around these events. I use the three-act structure, that is common in screenwriting, which is to say, something very dramatic happens about one-quarter into the story and then at the three-quarter mark. These dramatic moments serve to spin the story around and let it take off in a different direction. I do this to try and surprise the reader, so they will keep turning the pages to find out what happens next.

I am actively working on the next Burnside book, which begins as a missing persons case. That person has had a relationship with one of the recurring characters that populate the series. One of the fun aspects of this book, is the person was last seen at an L.A. Rams football game, so I arranged to take a tour of SoFi Stadium in Inglewood. I was able to walk on the field, see the locker rooms, and spend time in the private suites. I love the complexity here, because SoFi is one the most gorgeous stadiums ever built, yet it is located in one of the worst neighborhoods around. It is that contrast of the beautiful and the ugly that I enjoy exploring, especially because it allows me to see the good and the bad that exist in both.

There are currently 12 books in the Burnside series, and I have also written a political thriller. All of my books are available on Amazon, and while paperbacks can be purchased at other online retailers, I’ve chosen to go exclusive with Amazon for eBooks. A few years ago, I wrote some articles for an online sports website called Armchair All-Americans, and while those articles still exist, they are a little hard to find. I have also started writing articles for a blog dedicated to helping cancer patients; it is called the ROS1ders. As some of my readers know, I am a cancer survivor, and I try to share my experiences with others. I’d love to tell you more about this aspect of my life, but that would be a long conversation, and we’ll need to save that for another time!