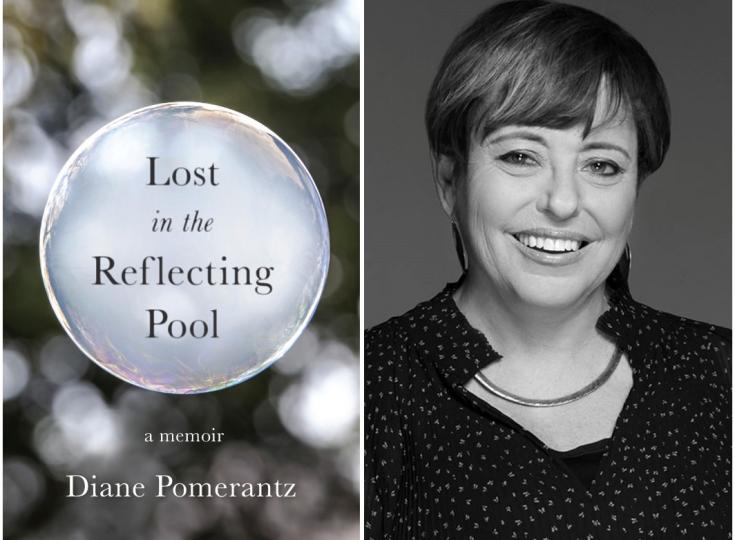 Dr. Diane Pomerantz is a Baltimore area psychologist who has been in practice for the past 39 years working with children and their families. She is a blogger for Psychology Today and has published articles and poetry in Motherwell Magazine, Adoption Today, Story Circle Journal, and other literary magazines. Her memoir, Lost in the Reflecting Pool, published by She Writes Press, is her first book and it has won multiple awards including being a winner in the 2019 Next Generation Indie Book Awards, 2019 Indie Excellence Awards, 2018 NYC Big Book Award, 2018 Foreword Indies Award and the 2017 Reader’s Favorite Award. Diane refers to her memoir as a psychological love story, sometimes tender, sometimes horrifying … it chronicles her marriage to a brilliant and charming psychiatrist, who while charming is also psychologically harmful. This is a memoir of trauma, strength, and resilience that above all else demonstrates that there is no escaping pain and disappointment. There are no guarantees. There is only life and no matter what else, one can move forward. As our Author of the Day, she tells us all about it.

Please give us a short introduction to what Lost in the Reflecting Pool is about.

Lost in the Reflecting Pool is the story of a marriage, my marriage. I am a well-trained psychologist and fell in love with a charming and brilliant psychiatrist. Ignoring all of the red flags of narcissism I saw, that I’d been trained to recognize, I moved forward. A mistake many women make all too often. This mistake would later come back to haunt me.

What inspired you to write "Lost in the Reflecting Pool"? Did you expect it to become an `award-winning memoir?

It took me many years to write this memoir, and as such, it’s hard to say there was “an inspiration” to write it as a memoir. It was more a need to tell my story, to find my voice, to hear my voice that I had lost in my marriage.

When I started writing my memoir 19 years ago, the title which was most meaningful, and lasted for years, was Scheherazade’s Cancer. According to the tale of The One Thousand and One Nights, many years ago, the king of ancient Persia discovered that his wife had betrayed him. His distress and wrath was great and, he had his wife beheaded. He then vowed to marry a young virgin every day and ordered her beheaded after the wedding night! Finally, he had married and killed all the young women in the kingdom until his vizier’s daughter, Scheherazade, asked her father if she could marry the king. Her father was not pleased about this and tried to persuade her not to do it. But she had a plan. Scheherazade was beautiful, well-read and intelligent, and she was a talented storyteller, able to weave together stories with lessons for her listeners. She married the king and on their wedding night, she told him with a tale that went on late into the night, but it was so late she couldn’t finish it and thus the king put off the beheading so she could finish the story the following night. The clever Scheherazade continued to weave ever more fantastic and adventure-filled stories, each night leaving the king on tenter-hooks to discover what happened next. Her powerful storytelling thus continued every night, until the king eventually let go of his fear of women, fell in love with the beautiful Scheherazade… and in his unending love for her, allowed her to live…

Scheherazade had a voice… but it was her wiles that kept her alive… for me, the first title of my memoir, Scheherazade’s Cancer, was my statement that I Tell My Story or Die… from either cancer or at my husband’s hand.

Through the writing of my memoir, through sharing my story, I found my voice and I was able to psychologically re-write my life-narrative.

Whether I thought the book would be an award-winning memoir - That’s an interesting question. The truth is, the bigger question was whether I would ever complete it!

You say that your story “is at times tender and at times horrifying.” Why?

This statement speaks to important qualities which the Pathological Narcissist possesses. The first was a quality that drew me to my husband and bound me there for a long time. Narcissists can be charming – flowers were my husband’s forte.  Or driving two hours to shovel my car out in a snowstorm when I attended a conference he wanted me to attend. Human charm is an invaluable ability. We don’t have to be a narcissist to have charm and use it well. There are well-adjusted extroverts that exude natural charm.  Charm in itself is a powerful gift that makes life more vivid and exciting. However, charm in the hands of a narcissist becomes a powerful weapon for controlling others and when they no longer feel their needs ae met their idealized object becomes devalued, disdained and the sadism emerges – that is what occurred in my marriage.

You had to survive both an aggressive cancer diagnosis and an emotionally abusive marriage.  How has this affected your views on life?

I don’t ignore things that I see and I trust my gut now. In my book I start with a quote by Leah Hager Cohen from her book Heat Lightning: “In some ways, I think every wrong turn I was to make … could be traced to moments of inaction, moments when I noticed things unfolding wrongly and failed to query or object.”

Now I always query of object and I am much happier.

What surprised you most from readers' reactions to the book?

Overall I have had a very positive response to my book. What was initially surprising was that the negative responses were not about the craft of the book but rather about that I had “stayed too long in the relationship,” and the readers being upset with me for not leaving sooner. I was initially surprised by this but then realized that my story had in fact really touched these readers as well – their responses were strong and were in fact responses to the story and I consider that to be positive. When an author puts pen to paper, it no longer belongs to the writer – it belongs to the reader and what the reader needs to do with what is read.

Trauma, strength, and resilience are important themes in your story. Why are they important to you?

As a psychologist I have spent my entire adult life helping others to find the strength within – we all share the same humanity.

Can you describe the Healing Through Writing Groups you lead?

I have been running Healing Through Writing Groups for the past several years. Some are in short workshop format and others are ongoing therapy groups. Both are very exciting and are one of the most enjoyable parts of my practice. In these group members have the opportunity to use writing, in various ways, as a tool to heal the emotional and physical wounds that are an inevitable part of life, and of everyone’s personal story. Sharing our stories not only heals but can transform our lives. These are not writing groups – there is no critique of writing. I provide my expertise as a clinician and as a writer to assist in opening up one’s creativity and to assist with self-reflection. I also work to keep the process safe. Privacy and confidentiality are an important part of safety. No critiquing happens in this group. The purpose of my groups are using writing for personal growth and healing. Self-expression in the form of writing is a way to find, claim, and speak one’s voice. Writing fosters resilience which is a quality that allows those who have experienced difficulties to move ahead in spite of what they have experienced. When we write we become observers which is an important component of developing resilience. We are more able to view our lives with enough distance and detachment to allow us to gain a more nuanced perspective. We can then reframe the problems in our lives and find solutions we might not have been able to see previously.

How do you think your memoir, "Lost in the Reflecting Pool" will help to create awareness on emotional and psychological abuse?

I am very pleased that the overall response to Lost in the Reflecting Pool has been very positive. I would like to think that the message received from my book, that emotional/psychological abuse in relationships is far-more prevalent than acknowledged and that in its subtlety it is so insidiously dangerous to the mental and physical health of its victims. At the present time, we are experiencing this on a national level with emotional/psychological abuse of an entire nation. In reality though, despite awards and a positive response I don’t know that my story, which is one of many, will have the impact needed to create real change. I am pleased for whatever help it provides to those who read it and find it helpful on a personal level.

What challenges did you face while writing the emotional journey of love and of life, of courage and endurance in your first memoir?

From the first draft of Lost in the Reflecting Pool I struggled with whether this story should be presented as a memoir or a work of fiction. Not only was I concerned with protecting the people I was writing about, particularly my children, but I also worried about legal liability issues and my privacy as a professional in the community.

I’m a storyteller and I love stories, listening to and telling them. Childhood memories of stories grounded me and made the earth solid beneath my feet.

I’m also a psychologist and through my work, I’ve learned that through personal stories we touch the emotional core of others. In my professional life, I’ve seen precisely what I experienced as a child. I knew that if I wanted my story to be meaningful to others, no matter what I called it, fiction or memoir, it needed to read like a story.

As I wrote I did decide I must take full ownership of my story and thus I made it a memoir. I put aside notions of using a pseudonym and only changed details to protect privacy. My writing style though remained the same.

I am currently working on two children’s books and a psychological thriller.

I can be contacted through my website at http://www.dianepomerantz.com