Garon Whited - Heroes are Never More Dangerous Than When They're Dead

Garon Whited - Heroes are Never More Dangerous Than When They're Dead
Posted on 21st of September, 2020 by Naomi Bolton 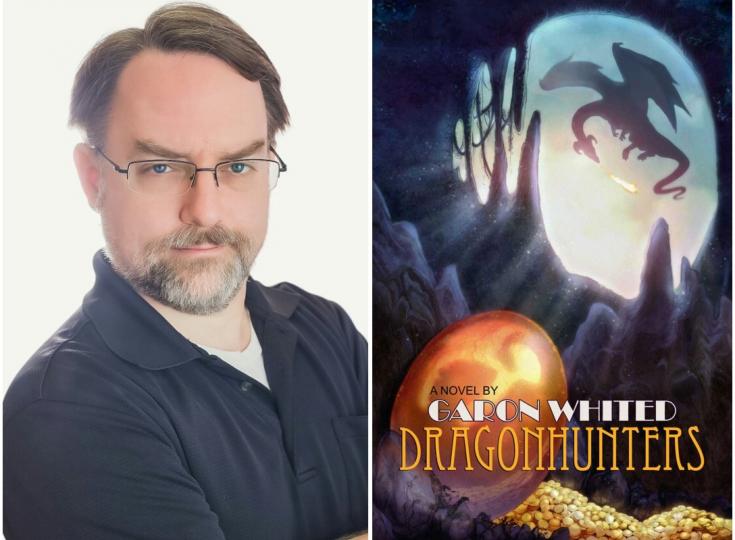 Garon Whited is a Perfectly Normal Person with an overactive imagination. This means he has conversations with people who aren't there and may, in fact, be imaginary. Garon tries to focus this into socially-acceptable venues, but he tends to associate with people who also have overly active imaginations, so he isn't sure he is succeeding.  As our Author of the Day, he tells us all about his latest book, Dragonhunters.

Please give us a short introduction to what Dragonhunters is about.

“Dragonhunters” does what it says on the tin: Heroes go hunt dragons. Admittedly, they have some setbacks and obstacles—I mean, dying is usually one hell of a obstacle—but they’re heroes. They’re not going to let a little thing like their collective demise stop them, are they?

What inspired you to write about a group of professional heroes?

I usually write about a most unprofessional hero—Eric, the protagonist of my “Nightlord” series. That, and I was wondering why the only dragon-hunting quests you hear about are the ones where the hero slays the dragon and all is well. Why not have the dragon win? And, initially, it does. Most of the time, that’s all it takes. But some heroes are more tenacious than expected…

Does your overactive imagination ever get you into trouble?

Never. Not once. Under no circumstances. And the statute of limitations hasn’t run out, yet, so, officially, my answer is a definitive “No.” End of story—at least for another two years, four months, and eleven days.

Where does your fascination with dragons come from?

I wouldn’t say I have a fascination with dragons, although they can be quite fascinating creatures. There are—fictionally speaking—so many different kinds of dragons! Some are incredibly intelligent, others are just flying lizards with big appetites, and some are wise, benevolent half-spirits, depending on where and when you select your draconic myths. Good or evil, kind or cruel, dragons have been part of humanity’s heritage since we first dealt with Things beyond our little circle of firelight. Our myths and legends are full of monsters, for good or for ill, and dragons are just one type of creature in the lexicon.

…and if I am fascinated with dragons, I have to say this is Tolkien’s fault.

There are a number of skills I prefer to keep secret. If people knew I had them, it would be harder to use them. Besides, I’d rather not kick off an investigation for at least for another two years, four months, and twelve days.

Ooo, that’s a tough one. Y’vin, the wizard, probably. He’s got to work with other characters, but he’s surly, bad-tempered, impatient, and arrogant. Yet, he’s loyal to his friends (read: the only people who can stand him), generous with his time and energy, and willing to risk his favorite skin for their sake. He’s complicated.

Then again, Aramon isn’t exactly two-dimensional. He’s a holy warrior, dedicated to the eradication of evil, and he’s got issues with the situation. He’s more than just some wind-up toy for the gods, sent clicking and whirring and clanking off to smite the wicked. He’s a person, with feelings and fears and hurts just like everyone else.

This is why it’s a tough question. All the characters are complicated, which makes each of them—and doing justice to their complexity in the story—a challenge. 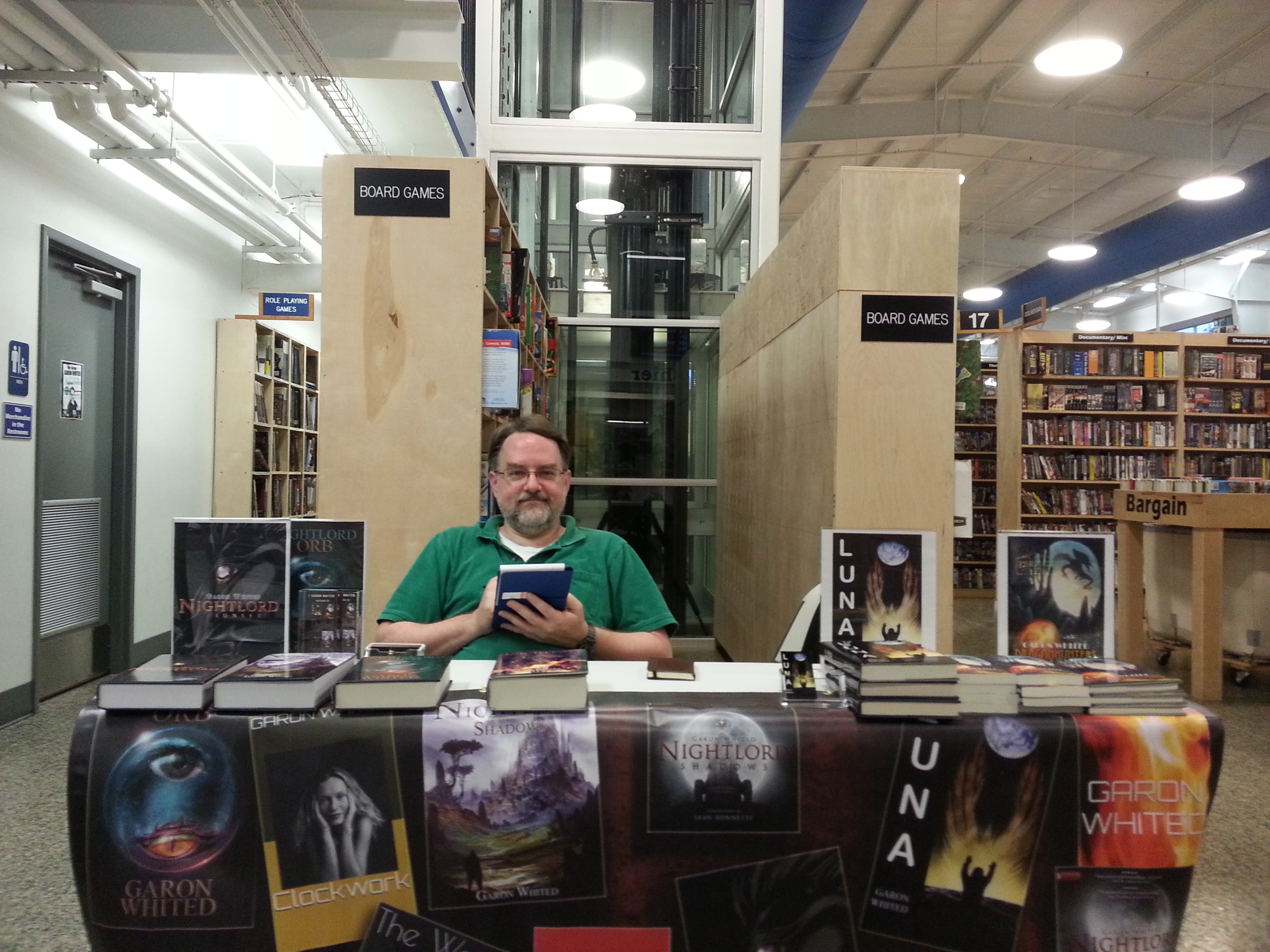 “Not anymore,” he muttered, darkly, wiping blood from a knife.

I emailed a friend of mine to do an artistic piece with a dragon and a dragon’s egg. I had to explain a bit about how and why this was significant—Spoilers!—and she immediately grasped the importance of it. I’d explain why the cover is significant, but, as I mentioned, spoilers. It’s important in the book. It explains a lot. You’ll see.

All the books I love, I would not have done better in their writing. Instead, I am content to let all of them remain written by their original authors. I have my own books to write, my own stories to tell, and in this, I feel I am adequate to the moment. I hope to continue to improve as I continue to write, and in this I am well pleased.

I’m not sure I want to meet any dead people. They’re poor conversationalists. Plus, their families get kind of irate at having to put them back in the ground. Seems rude.

As for living people, I think I’d like to meet James Burke. He authored the book, Connections: Alternative History of Technology. He strikes me as one of the most brilliant and entertaining people in the world.

I don’t really have a motivational phrase I like. The one I use most often, however, is, “Do you want to eat? Then get to work.” It’s kind of the mantra of the self-employed.

My writing habits are pretty simple. I wake up whenever I wake up. I’ve slept until I can’t sleep, so it’s time to get up. I make that grueling commute to the office—ten, twelve steps, something like that—and fire up the computer. After I’ve read the last few pages I was working on, I’m up to speed and hate everything about it, so I do it over before I continue writing new stuff. Somewhere along the way, I eat, do laundry, answer mail, all the mundane things that get in my way. (I’ve learned not to ignore them. If I ignore them, they pile up, and I waste an entire day dealing with them every week or so.) Eventually, I get tired. When I’m making more typos than words, I’m too tired to write, so I go to bed. Eventually, I wake up… whenever I wake up, and the cycle repeats.

Occasionally, people interrupt me, then go back to Porlock. So far, no fatalities this year… but the year isn’t over.

Book Seven in the “Nightlord” series, tentatively titled, “Fugue.” It should be out this year, but I’m not sure when. It still has work to be done.

The “Nightlord” series is a first-person, diary-like account by Eric, our protagonist. (You’ll see him in “Dragonhunters” as a Mysterious Figure who drops by to kick things off.) Eric is a physics teacher who gets turned into a vampire and discovers that’s the least of his problems—to the tune of seven books in the series so far!

I try to answer comments on the Facebook pages. I also have a website (www.garonwhited.com) if you want to browse some free stories, sign up for the newsletter, or shoot me an email. There are also links to all the books—"Dragonhunters” included. As for actual books, the Kindle, hardbacks, and audiobooks can all be found on Amazon. Just search for my name. Amazon knows me.