Ricardo Victoria - A Sci-Fi Adventure in a Magical Setting

Ricardo Victoria - A Sci-Fi Adventure in a Magical Setting
Posted on 17th of October, 2019 by Naomi Bolton 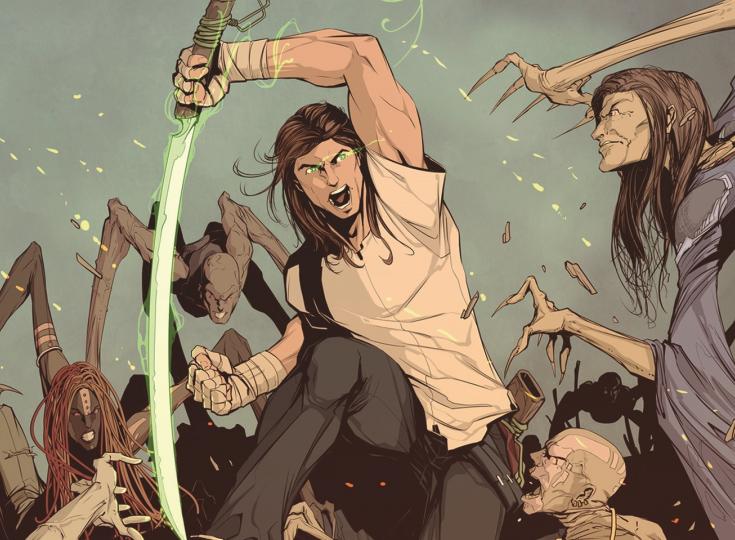 Born in the frozen landscape of Toluca, Mexico, Ricardo dreamed of being a writer. But needing a job that could pay the rent while writing, he studied Industrial Design and later obtained a PhD in Sustainable Design, while living in the United Kingdom. There, he did a few things besides burning the midnight oil to get his degree: -Trained in archery near Nottingham -Worked in a comic book store to pay for his board game & toy addiction He is back now in Toluca, living with his wife and his two dogs where he works as an academic at the local university. He has short stories featured in anthologies by Inklings Press and Rivenstone Press and he was nominated to a Sidewise Award in 2017 for the short story “Twilight of the Mesozoic Moon”, co-written with his arch-nemesis, Brent A. Harris. As our Author of the Day, Richard tells us all about his book, The Withered King.

Please give us a short introduction to what The Withered King is about.

It’s about a retired hero, Fionn, who reluctantly gets thrown back into action after agreeing to help a friend find a missing person. Now he finds himself in the position of having to mentor a new generation of heroes in the use of their special abilities and the titular Tempest Blades, in order to be able to save his people –and the world - from an ancient evil Fionn thought long banished and now is back. An evil that took a lot from Fionn (and the reason he retired). The book is about adventure, drama, mystery, but above all, about realizing that life does give you second chances.

Tell us more about Fionn - what makes him so special?

At the outset, the most obvious thing is that he has this special power ‘The Gift’ that in his case is manifested through a healing factor (with the logical slow aging side effect). And he has a legendary blade, Black Fang. But those are just things he has. What makes him special is who he is as a person: a widower, a reluctant mentor, a loyal friend, a clever fighter, and above all, someone that -while is not fond of fighting- never backs down if that means being able to protect those that can’t protect themselves.

Since I was a kid I always wanted to live adventures like those from the cartoons I used to watch. But this being the real life, that would have been a tad… impossible. So I settled with writing them and living vicariously through my characters. I wanted to share with others my stories. It has also helped me to deal with my depression, as writing allows me to find a way to deal with the issues inside me in a healthier way, to let go of frustration when it builds up, to cheer me up when things look gloomy and to remind myself that I don’t have to carry all this weight on my shoulders, it’s ok to ask for help, it’s ok to fail. We are humans, we are stronger than we believe and there are more good things than bad things around us. I use my characters to talk with myself about that and hopefully, it will help a reader who is feeling the same, down the road.

What makes Gaby and Alex such great companions for Fionn?

Both represent things he has lost and things he can amend for. They are his second chance.

Gaby represents many things. She slowly becomes his second chance at love. But she is more than a love interest. Of all the characters, Gaby is possibly the best fighter, so with Fionn, she quickly establishes a relationship between equals, teammates. From their first fight together, they get in synchrony. And while Fionn does teach her a few things to help her get a better handle of her abilities, she is the one that slowly gets Fionn to open up again, trust others and return to the way he used to be. I think that Gaby’s no-nonsense attitude and drive is what makes her the heart of the team and forces Fionn to get back at the world-saving business. They complement each other.

Alex is for Fionn, a way to turn the page and come to terms with his best friend’s Ywain sacrifice (as Alex is related to Ywain). It’s a way to actually be a proper teacher. And Alex’s temper and need to jump into the adventure reminds Fionn of who he used to be when younger. Fionn becomes more than a teacher to Alex but acts as a big brother to a person who sees Fionn as his childhood hero and who needs help to find his place in the world and deal with his inner demons. Through helping Alex, Fionn is helping himself as well.

Why did you decide to add a flying ship to the mix?

First, because they are fun! And very ‘cinematic’ to write about. Second, I studied Industrial Design, so imaging technology is something I like. Third, one of my favorite videogames is Final Fantasy VI, which features an airship. And fourth, from a logistic point of view within the story, it allowed me to keep the pace going and my characters traveling at faster speeds without having to handwave some of the common issues in fantasy. And in a way, the Figaro became a character on its own. A seventh main character if you like.

Well I can tell you that playing music is NOT one of them. I enjoy studying boardgames, how they work, developing strategies for when I play, I play to win. A part of me is very competitive. And that led me to start developing my own.

My wife says that I tend to have a photographic memory for the weirdest scientific and historical details.

Keeping the motivation going, being disciplined and keeping the expectations realistic so you know that this is an uphill battle, but one worth undertaking. So remember the good days, the good reviews, to help you get over the bad ones.

That’s a hard choice, because I would like spending time with all of my six main characters. To me, they are like my friends. And probably I would take them to a theme park.

No really, not for me at least. I like reading about them, I like a good mystery, a good conspiracy, a good legend. I’m from Mexico –which is pretty surreal as a country for a lot of reasons- and I grew up watching anime and playing Japanese RPGs, in so surreal comes with the territory. Also, I have very vivid dreams, which have served as inspiration for my writing. So I’m used to that. Now, I believe that writing is ultimately about the human experience, about finding who we are and why we are here, what makes us tick –both in a personal and in a more philosophical level, and those are questions that can translate to pretty much every genre and setting.

It’s funny you ask about that specific chapter. It was actually the last one I wrote of the whole book, and it took me two weeks to finish. Originally the novel had another first chapter, a prologue that reads more like a cosmic horror tale chronicling the appearance of the villain. But my beta readers told me (with good reason) that for a book with a title that implied action, it started late till chapter three. So I decided to change it to what it is now the first chapter. Since I already had the idea of what happens in it–it was part of a short story about Fionn-, it was just a matter of adapting, polishing, and putting it on paper. Funny thing too, a few readers have asked me to write more about the story of the whole war of which the first chapter is the end. But I would like to keep the mystery on it for a little while.

I wish I was more disciplined. But I admit I kinda write when motivation (rather than inspiration) strikes. So I use dead times (like commuting to work) to plot ideas in my head, think of dialogues and scenes so when I have time to write, I know what to write.

As I have to write a lot due to my day job (mostly academic papers), I write stories when I can and I’m not tired.  I do try to write at least 3,000 words per day, but it is not always possible. Maybe the only habit I have is that I need to have the right song for the character of the scene in question, playing in a constant loop, to keep the ideas flowing.

The sequel of Withered King, which has a tentative title: “Tempest Blades: Cursed Titans”.

I’m also working on a short story, a horror one about Pirates, Mayan curses and Lovecraftian horrors taking place in Campeche, Mexico.

Many of my stories have been published in anthologies by Inklings Press (of which I’m a co-founder). The most recent one ‘Asherah’s Pilgrimage’ appeared in ‘Tales of Magic & Destiny’, and is a prequel to The Withered King, and is a story behind a legend mentioned in the book.

Here is the link: mybook.to/MagicDestiny

You can find links to all the other anthologies here: http://www.inklingspress.com/anthologies.html

You can also find some of my stories in the following anthologies:

“The Smile behind the Door” in Haunted https://www.amazon.com/dp/B07XXHRS21

“What measure is a homunculus” in Quantum Soul https://www.amazon.com/dp/B0763KCC6D