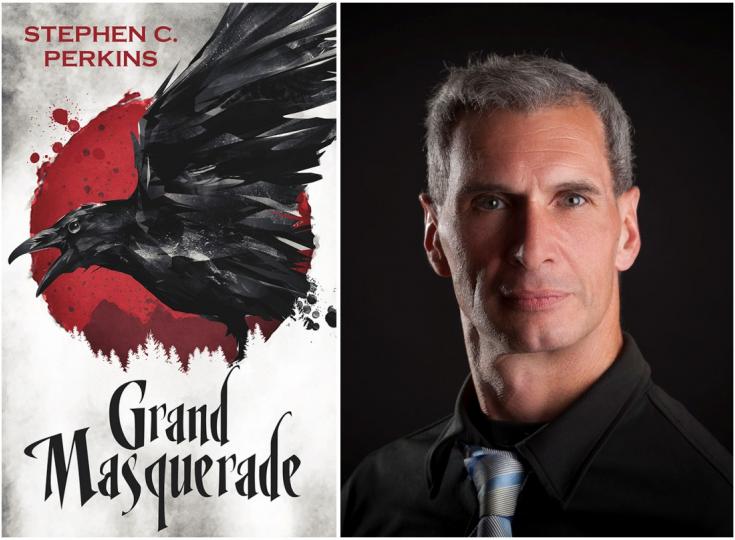 Stephen Perkins is the bestselling author of six novels, Raging Falcon, American Siren, Escape to Death, Sorcerers' Dynasty, Twilight's Last Glory, and Sky Parlor. His newest book, Sky Parlor, was released in June of 2019, instantly hitting Amazon's Hot New Release list, and proving to be yet another thrilling, exciting, thought-provoking, and conspiracy-laden epic. His growing legion of rabid and loyal fans will be excited to learn that the Ebook version of Perkins's new novel, Grand Masquerade, has just now gone live on Amazon, and print editions are now available @ lulu.com/spotlight/RAGEOFWORDS for as much as 15% off Amazon list prices. As our Author of the Day, he tells us all about Grand Masquerade.

Please give us a short introduction to what Grand Masquerade: A Supernatural Suspense Novel is about.

Although on the surface, Grand Masquerade is an entertaining horror thriller, on a deeper level, the narrative of the novel concerns the secrets people not only hide from each other but even from themselves. Eventually, however – and this is especially the case with the characters in Grand Masquerade – those secrets emerge as destructive forces.

What inspired you to write about a town that sits on an ancient ley line guarded by spiritual beings?

Believe it or not, Rupert, Vermont is a real place, a small and rather isolated town near the border of Vermont and New York. Surrounded by mountains and thick woods, it is a remarkably spooky place. Before beginning to write Grand Masquerade, I decided this would be an ideal setting for a supernatural scare fest.

You weaved some corporate greed and politics into the story. Why did you take this approach?

These are subjects I’ve explored with my previous six novels and, I thought, weaving these intriguing themes within the narrative of a good old fashioned horror story would not only lend depth to the novel, but also expand the possibilities of what could be done with Grand Masquerade’s colorful cast of characters.

The book contains quite a couple of twists and turns. Did you plan it out all before you started writing, or did it happen along the way?

The twists and turns of Grand Masquerade developed in quite an organic fashion, along with the gradual development of the characters. Sometimes – which is quite scary when one considers the possibility – the characters do take on a life of their own. In that case, as a creative writer, one does find a sense of empathy becoming necessary. And, while writing, one may also find a question looming: how is it – as living and breathing human beings – would these characters truly react and behave?

Let me put it to you this way. If there was a contest among contemporary authors, now living, as to who could consume the most coffee on any given day, I would win – hands down!

Was there a single defining moment or event where you suddenly thought, ‘Now I’m an Author,’ as in – this is now my career?

Oh, most definitely. That epiphany came, the moment I woke up one morning to witness an orange best-seller banner, stuck on the amazon retail page of Sorcerers’ Dynasty, one of my earlier book releases!

Grand Masquerade has a very interesting cover – please tell us more about it.

First and foremost, I must give credit to the cover designers at Damonza.com, they are the best in the business, when it comes to creating eye-popping book covers. Indeed, the cover for my latest novel, Grand Masquerade, has proved to be exceptionally effective in attracting new readers. Conceptually, I wanted an image that conveyed a sense of mysticism, symbolism and, above all, horrific menace!

In the book, an interface app called Minerva allows people to communicate through the power of the mind. What intrigues you about the possibility of this kind of technology?

Considering the larger implications of the recent and rapid development, as well as the pervasiveness of digital technology in the 21st century, the question of what personal privacy entails has been increasingly redefined. The human mind is perceived to be the last sanctuary of privacy yet to be breached by these invasive technologies. Perhaps soon, even one’s thoughts will no longer remain safe from complete scrutiny.

I had the most fun creating and developing the story arcs of the villains. For the entire novel, they hide behind the façade of normality which, at the very end, makes the revelation of their identities that much more terrifying.

I must confess; I’ve never had that problem – the muses have seen fit to always gift me with an embarrassment of riches!

As a writer, I’m very disciplined – but I must have a pot of coffee first!

When I can vividly visualize the entire story as if I’m watching a movie, that’s when I know it’s time to start writing!

Grand Masquerade has, thus far, shown itself to have a great deal of commercial potential. Perhaps – and you heard it here first - there may be a sequel in the offing, later on this year!

I would love to interact with your readers. They can contact me on twitter @ RAGEOFWORDS or via email @ [email protected]! In the meantime, they shouldn’t forget, print editions of Grand Masquerade are now available @ lulu.com/spotlight/RAGEOFWORDS!