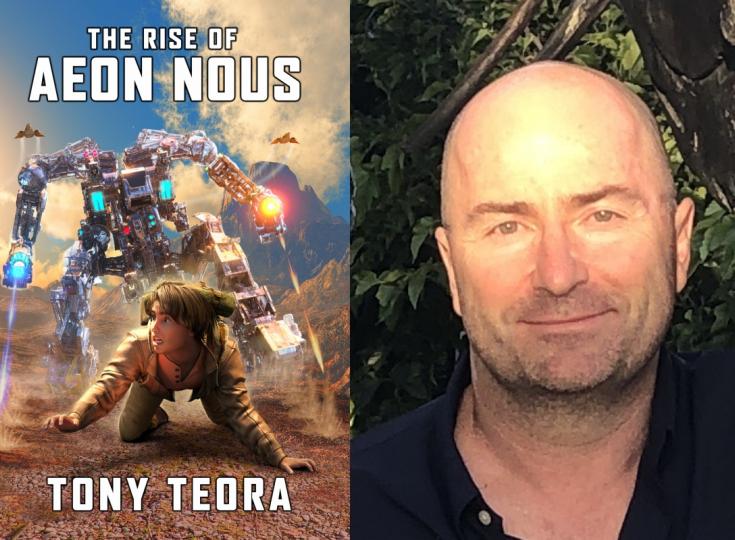 Tony Teora is an Electrical Engineer who spent most of his career working as an entrepreneur on innovative technologies while sneaking in writing during his weekends. He’s also taught college classes on military ships at sea and ran a few tech start-up companies. In 2020 Teora retired to dedicate his life to his true passion: writing science fiction. Tony Teora is the author of six novels and various short stories. Teora’s novels have received starred reviews from well-known book reviewers and fans. Teora grew up in New Jersey, went to high school at Moses Brown in Providence RI, and later graduated from Rutgers College of Engineering. He’s studied Japanese and currently lives in Sapporo, Japan. As our Author of the Day, he tells us all about his book, The Rise of Aeon Nous.

Please give us a short introduction to what The Rise of Aeon Nous is about.

The Rise of Aeon Nous is a coming of age story about a genius twelve year old child, Shu Franklin, who lives in Julian, California in 2096. The world was almost destroyed in 2047, but saved by Aeon Nous. Life in the Utopian city of Julian is shrouded in mystery. Shu and his friends discover secrets about their Utopian hero Aeon Nous who saved the world that contradict some of their studies. One secret is deadly, and starts a war that could destroy everyone. It’s up to Shu and his friends to save the world!

What inspired you to write about an AI computer that discovered an apocalyptic extinction event and kept it secret?

AI will shape the future in ways that I think we don’t truly understand. It may become godlike, or at least like a parent to humanity. Parents don’t always tell everything to a child—and for similar reasons the AI keeps the apocalyptic event secret. But please note, that the AI has not given up. It is working behind the scenes to find a way to expose the apocalyptic event when humanity is ready—I don’t want to divulge more, otherwise it might give away too much of the storyline.

Tell us more about Shu Franklin. What makes him tick?

Shu lives to learn and help people. Shu is inquisitive, super smart, a bit arrogant and loves to win. He never gives up, and believes whole heartedly in the Utopian virtue of honesty. He feels an obligation to help everyone—from helping ants to saving the world. What distinguishes Shu is his drive to never give up, even against seemingly insurmountable odds. He realizes that the human brain can solve complicated problems, even ones that seem impossible. He loves to think.

Why did you pick three twelve-year-olds as your protagonists?

I think it’s a time that most of us lose our childlike innocence—we start to become physically adults and begin to think differently. This was an age that really impacted my life personally, and I hear the same from friends. I felt that the learning experience of a twelve-year-old in the future would be interesting when compared to today’s education.

If I tell the readers my other secret skills, they will no longer be secret! I’m an electrical engineer and love physics and math. I’ve run a few tech companies, and have consulted to the US military on computer and technology-related projects many years back. I even got accepted as a special agent into the FBI (contingent on a background check) but took a job building radio-controlled electronic toys instead. So I’d say my ‘secret skills’ are technical related skills.

You are an Electrical Engineer. How has this influenced your writing?

Yes, and my studies in physics and math influence my writing too. I really liked computer architecture in college and later got heavily involved in computers. It’s why I’m a firm believer that AI will change the world.

What inspired the creation of your "Utopian" society?

I think we all know there’s something wrong with today’s society. For example, the gap between the rich and poor keeps expanding. I think it’s the same with knowledge. I wanted to build a society that was new and beneficial to all inhabitants of planet earth. I don’t think our society will flourish without some major changes. And when I say society, I mean all of the world’s civilization. I truly believe that if our spiritual path is not changed, we will become extinct. It’s why I included a new form of Utopian society.

Characters don’t always listen, and sometimes they get into big trouble—like Andy Blackwell. Happens all the time. Then, someone in the story has to find a way out of that mess that’s not deus ex machina, and it’s not always easy—but it sure makes a fun story to write!

The Rise of Aeon Nous includes many nods to classic Sci-Fi. Why did you take this approach?

I love Sci-Fi and thought it’d be fun to reminisce about some of the classics. Not everyone will know all these classics so I thought including them might inspire folks to pick them up later, or watch a great classic movie like the 1956 film Forbidden Planet.

Why did you pick the year 2096 as the backdrop for your story?

I thought this would be roughly the time it would take for society to crash and rebuild into something sustainable.

Was there a specific moment in your life when you realized "I am now an author?" as in "this is now my career?

I’ve been writing novels since my college days, but in 2004 when I published Mad Worlds Collide, I said this is the career I really wanted. But it took until 2020, when I was working on The Rise of Aeon Nous, to finally say: “This is my career.”

I like to write in interesting parts of the world. It’s helps me focus my mind. I used to write in the mountains of Julian, California, but I now write and live in Sapporo, Japan. Sapporo is a beautiful city with lots of nature. I like to write for about 2 to 4 hours in the morning, then exercise and read, and then do another 2 or so hours a day of writing in the afternoon or late hours. I like breaking up the writing with exercise and reading, and I write a bit differently in the evening vs. day, so I like having two shifts.

I am writing Darkness Descends, a sequel to The Rise of Aeon Nous. I’ve also started a sequel to Extinction and putting out a collection of SciFi short stories.