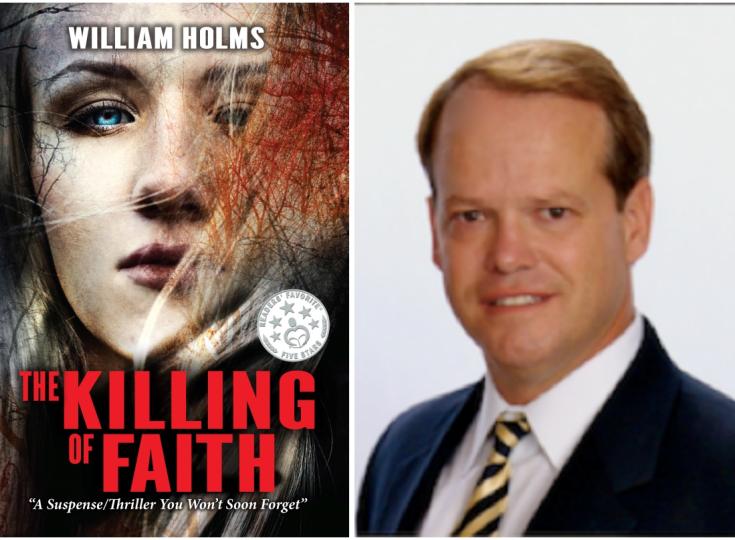 The Killing of Faith is William Holms’ debut novel. He followed it up with the second book in the series, The Beginning of Hope. Now he finished the third book in the series, The Fall of Grace. William Holms grew up in Hitchcock, Texas – a small town south of Houston. An alumni of The University of Texas, where he received his undergrad in business, and Baylor University, where he attended law school, William Holms is a veteran trial and divorce attorney with twenty-nine years of experience in both the legal field and the study of the human condition—which always comes into play in the practice of law. Inspired and sometimes unsettled by his observations surrounding cases, Holms channeled his background into his first riveting suspense/thriller novel, The Killing of Faith. As our Author of the Day, he tells us all about this book.

Please give us a short introduction to what The Killing of Faith is about.

The Killing of Faith is the first book in the award-winning Killing of Faith series. Faith, a mother of three, tells the story of her life beginning in her teen years and ending after meeting the man of her dreams and finding herself in an unbelievable life-and-death struggle for survival. You soon realize what happened to Faith can happen to anyone.

What inspired you to write about someone who is plunged into a living nightmare after meeting the man of her dreams?

The Killing of Faith, draws on my 30 years of experience practicing family law and dealing with marriage and divorce.

Tell us more about Faith. What makes her so special?

Faith is a beautiful woman who’s spent her whole life getting everything she wants by her good looks. Faith learns the hard way that sometimes her looks can’t save her.

You are a veteran trial and divorce attorney. How has this influenced your writing?

The book is written from the first-person view of a woman. I was able to write from a woman’s perspective because I’ve spent so many years representing and speaking for women.

It was a difficult decision to decide where Faith’s story should begin. I chose to begin when she was a young girl because it was those years that made her the woman she became.

The story contains some twists and turns. Did you plan it all out before you started writing, or did some of it just "happen" along the way?

It absolutely just unfolded as I wrote. I had the idea for the ending and the rest came as I wrote.

Readers say the book grabbed them from the beginning and kept their attention throughout. How did you pull this off?

The plot of the book is so compelling. I used flashbacks and flash-forwards to keep the reader in suspense.

Book 1 can be read as a standalone, but I don’t think anyone would read the first book and not want to find out what happened next and read the next books.

Cool cover. Tell us more about how it came about.

I had a great cover guy – Rob with SelfPublishingCovers. He did a great job helping me put a cover together that catches the desperation of Faith’s situation.

Does your book contain an underlying message? What do you hope readers will take away from it?

On top of the overall plot, the book helps readers appreciate what they have. Focus on the important things in life – family, love, enjoying the simple things in life.

I’m working on the release of my third novel in the series, The Fall of Grace, on December 1st.

Where can our readers discover more of our work or interact with you?

I love interacting with readers. My books are available on Amazon or you can contact me and I’ll send you a signed copy. Email me at [email protected] or visit my website at www.williamholms.com