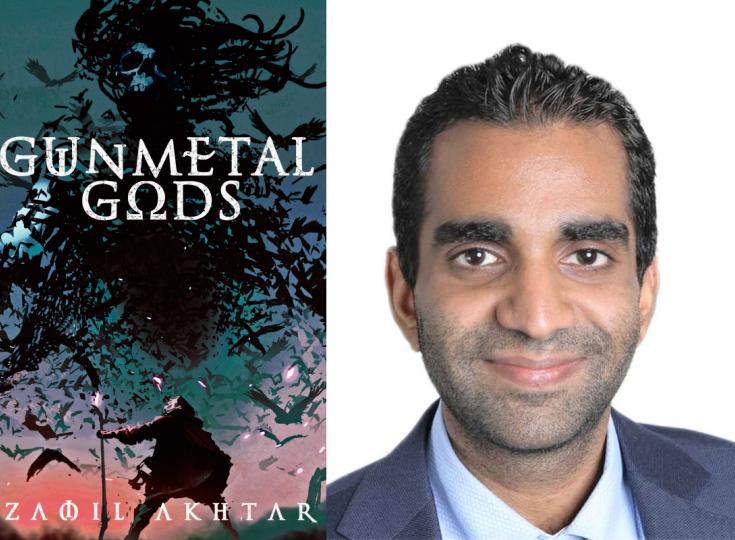 Zamil is an indie fantasy author based in Dubai, where he lives with his wife and pet rabbit. Of Pakistani heritage, he grew up in the Middle East and moved to Massachusetts when he was thirteen, and his varied upbringing colors his fiction. He’s an IR junkie, horror movie binger, and avid traveler. As our Author of the Day, he tells us all about his book, Gunmetal Gods.

Please give us a short introduction to what Gunmetal Gods is about.

Gunmetal Gods is about two men who are destined to do battle. In terms of country, language, and faith, they are as different as could be, yet at their cores they both want the same thing: simply to be happy, in a place of peace, with their loved ones. But the kings and gods have called them to war, and so they must fight each other or risk losing everything they hold dear.

What inspired you to write a story featuring Lovecraftian gods, mischievous djinns and astral magic?

I enjoy putting horror elements in my fantasy stories because I do write a lot of horror too. I've written quite a bit of Lovecraftian-style cosmic horror, as well as horror stories about djinns. I felt both elements worked well in the dark and bloody setting I was building for this story.

Tell us more about Micha. What makes him tick?

Though Micah is a deeply religious man, his ambition is boundless. He is in constant turmoil because to get what he wants, he has to do obviously reprehensible things. Sometimes, he justifies the horrible things that he does in order to make himself feel better; at other times, he feels guilty and cries out for forgiveness.

You are based in Dubai. How has this influenced your writing?

I'm not sure whether living in Dubai has been positive or negative for my writing. On the one hand, it's a very busy city, and I prefer peace and quiet when writing. On the other hand, it's one of the most convenient cities I've ever lived in, so having my day-to-day life be smooth and predictable has helped me develop better writing habits. You can also take short and inexpensive plane rides to dozens of countries with completely different cultures, which helps with creativity.

Readers say that the book reminds you of Game of Thrones. Are you a fan of the series?

I'm a huge Game of Thrones fan, both the books and the TV series. I love how GRRM uses historical parallels and influences from medieval England, and so I did the same thing in Gunmetal Gods but with medieval Middle-Eastern history as a source of inspiration.

Despite being quite introverted, I really enjoy public speaking; back when I was in college, I gave a speech to the Governor of Massachusetts on the importance of cultural education. I have no fear talking to large crowds about my ideas, yet I'm terrified if I have to socialize in a crowd. Go figure.

Why did you decide to write the story from first person POV?

One of my favorite novels of all time is Fight Club, which is written in a first person stream of consciousness, with an unreliable narrator. It convinced me that first person POV was the best vehicle for evoking emotions in the reader. I just love the intimacy, voice, and freedom first person POV provides. I prefer writing with a distinct voice, rather than in a more neutral, zoomed-out-camera type language.

I usually plan out my novels in advance, but I wrote Gunmetal Gods without any plan at all, so the entire story is characters doing exactly what they want. However, the two main characters are so obsessed with their respective goals, that by letting them do what they wanted, the story stayed firmly on track. Ironically, for this reason, it's the most plot-focused story I've ever written.

There are characters that, in order to attain great magical power, suppress their emotions, desires, and individual identities. It was challenging to make these characters interesting while also keeping their emotional reactions to an absolute minimum. Kind of like Data from Star Trek.

I used to play a lot of role-playing-games in my childhood, so have always been in love with fantasy. I prefer to blend it with elements from other genres, especially sci-fi and horror.

Always use your best ideas on your current work-in-progress, rather than saving them for the next project. You'll always come up with more ideas when it's time to write the next book.

I tend to write in spurts rather than consistently. The first draft of Gunmetal Gods was 140k words and I wrote it in 1 month. I wish my writing habits were more consistent because overall I'd probably be more productive.

Right now I'm working on Gunmetal Gods Book #2. It is still in the early stages, so I don't have much to say about it, but it will be a challenge for me as I've never written a series before.

You can find my other work at ZamilAkhtar.com. I always respond to emails at [email protected], but I'm also on FB (facebook.com/zamakhtar1), Instagram (@zamilakhtarauthor), and Twitter (@zamakhtar). 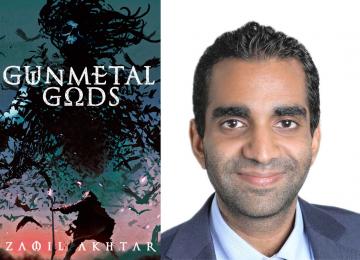 Zamil Akhtar - Lovecraftian Gods, Mischievous Djinns and Astral Magic
FEATURED AUTHOR - Zamil is an indie fantasy author based in Dubai, where he lives with his wife and pet rabbit. Of Pakistani heritage, he grew up in the Middle East and moved to Massachusetts when he was thirteen, and his varied upbringing colors his fiction. He’s an IR junkie, horror movie binger, and avid traveler. As our Author of the Day, he tells us all about his book, Gunmetal Gods.