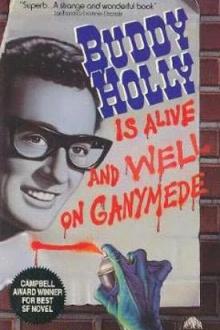 When televisions worldwide begin broadcasting a nonstop, noninterruptible live performance by Buddy Holly purporting to originate somewhere in the vicinity of Jupiter, Oliver Vale--the apparent object of the broadcasts--finds himself drafted for a mission so secret that even he is not sure of its purpose. (Campbell Award winner, 1992)

ill be most pleased as she ships you off to the state hospital at Osawatomie!"

Buddy took a few steps back from the camera and shifted the Strat into playing position. "That's all the sign says, but I'll repeat the address in a while in case nobody's listening right now." He looked up and around, as if watching an airplane cross the sky. "Seems like I'm in a big glass bubble, and I can't tell where the light's coming from. It's a little chilly, and I sure hope I don't have to be here long. In the meantime, here's one for your family audience, Mr. Sullivan." He struck a hard chord and began singing "Oh, Boy!" in a wild shout.

I remote-controlled the Sony into blank-screened silence. Poor Buddy. He had seemed to be surrounded by nothing worse than stars and shadows, but I remembered enough from my Introductory Astronomy course to know better. Ganymede was an immense ice ball strewn with occasional patches of meteoric rock, and its surface was constantly bombarded by vicious streams of protons and

Leah A. Zeldes
5
Bradley Denton's best-known novel likely resonates more with Baby Boomers who than it will with younger readers, but for our generation, the 1991 John W. Campbell Memorial Award winner is a rockin' and rollin' masterpiece. Oliver Vale, born in 1959 to a teenaged single mother obsessed with Buddy Holly and UFOs, leads a humdrum if stressful life in Topeka, Kansas, until a few years after his increasingly zany mother's death. Everything changes one day in 1989 when all TV stations, everywhere in the world, become preempted by a continuous broadcast depicting the long-dead singer, who claims to be imprisoned in a glass bubble on Ganymede. A sign there reads, "For assistance, contact Oliver Vale, 10146 Southwest 163rd Street, Topeka, Kansas, U.S.A.," Holly says, pleading, "So would someone out there please get in touch with that fellow for me?" Vale is forced to flee his home, pursued by the law, a renegade federal agent, his psychologist, a cyborg Doberman, a pair of reanimated otherworldly spirits and a populace maddened by the signal blocking their favorite sitcoms. Meanwhile, he recounts growing up amid the music and events of the 1960s and '70s. This fond and funny romp through the history of rock and roll feels more skin to a Carl Hiaasen novel than typical science fiction — hard-sf lovers may find it too lightweight, but if you like the works of writers such as Mel Gilden and Christopher Moore, you'll enjoy this one.

Adam Weekes
5
Rock and Roll history becomes a religion in this book. A special treatment of a world that obviously meant a great deal to the author. The story is fun, gripping and fast paced. I love this book. I have read it three times since It was randomly given to me in 1994. I would love to see the film version capture the essence that makes this so magical.

Dai Alanye
2
Droll and offbeat, but pointless. The best I can say is, for those who like this sort of thing, this is probably the sort of thing they'll like.
09/21/2012

tommarball
4
nothing deep here, but fun. humorous and enough action to keep the story moving. kind of in the vein of hitchhiker's guide. i enjoyed it.
04/05/2012

Loren
4
Kept me interested throughout with never a dull moment. The ending was disappointing, the story felt to be building up to something bigger, but still fun and enjoyed it.
11/15/2011

Rob Johnstone
4
I really enjoyed this story. The writing style had me a little worried to start with but as the tale took hold, and the author gained more confidence in the book began to flow more readily. The main character Oliver grew on me, but I would have liked to see some of the other characters develop, such as Gretchen, or Pauls family. I would love to see the author revist this for a rewrite as I think it would be a real benefit. Give it a go.
04/26/2011

Shelby Davis
2
It's difficult to pick out a particular fault, but this novel just didn't seize my attention as it seems to have done for my fellow reviewers. Perhaps part of my disappoint lies in my (however unfounded) expectation of a Douglas Adams-style laugh-fest, which this isn't--it's a humorous novel, to be sure, but not one that'll have you repeating savory little lines of pithiness to yourself for days afterward. And while allusion is unavoidable in a novel about a cultural icon, it seemed to lean almost entirely on cultural references--a 50s travelogue, as someone below put it, which isn't necessarily a bad thing, but it is a bit of a niche thing.
01/21/2010

Gilmartin
5
Absolutely marvellous. An ingeniously silly plot involving aliens and Buddy Holly leads the reader deftly through a moving and touching coming-of-age tale about a boy dealing with his mother's insanity. Add to that a sly critique of post-1950s America, and you have a brilliant read.
10/02/2009