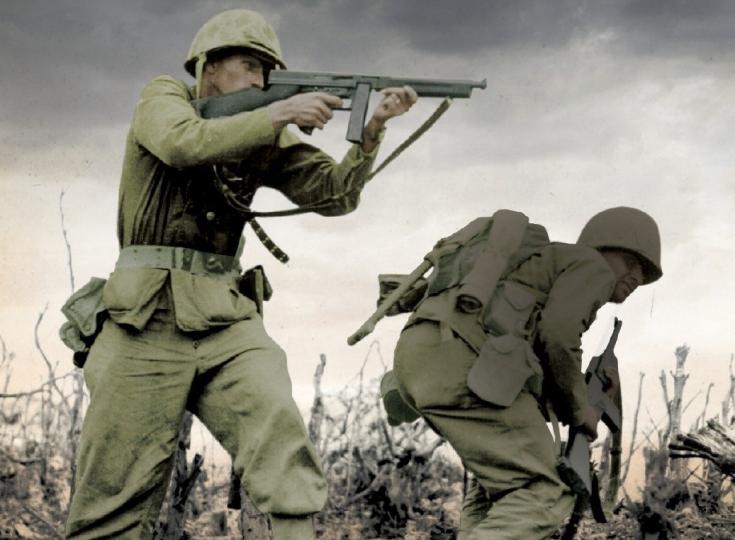 MATTHEW ROZELL is an award-winning history teacher, author, blogger and speaker. He has been featured as the ABC World News 'Person of the Week' and has had his work filmed for CBS News, NBC Learn, the Israeli Broadcast Authority, the New York State United Teachers, and the United States Holocaust Memorial Museum. Most recently, he is the recipient of the New York State Education Department's Yavner Teaching Award for Distinguished Contributions to Teaching the Holocaust and Human Rights. We have asked him to pick his five favorite books about World War II and did an interview to get his insights. 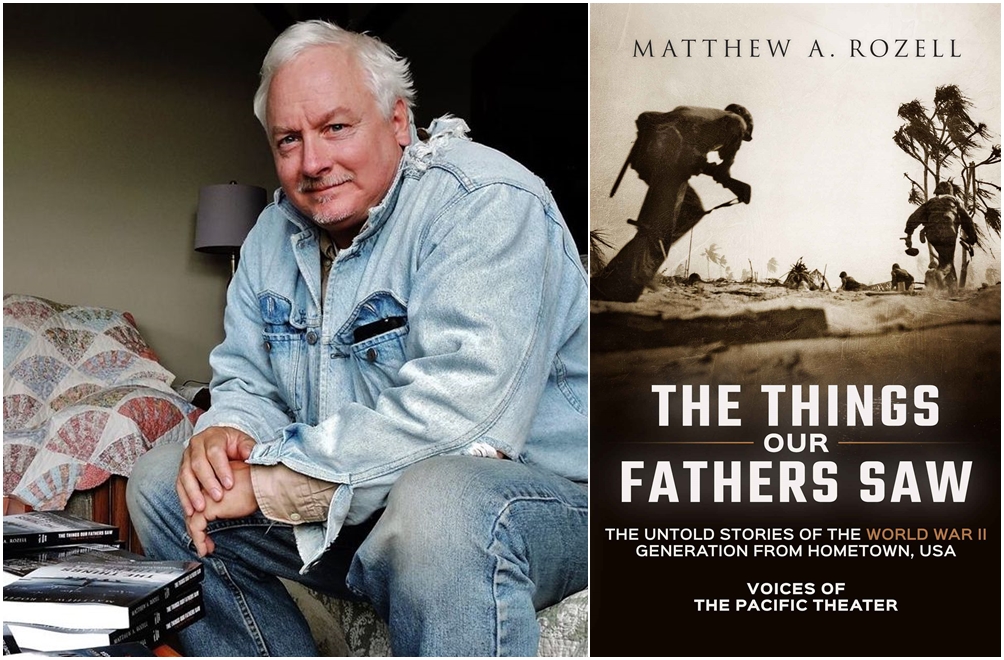 You are a highly respected historian and have won numerous awards for writing and teaching history. But I was wondering which historians inspire you?

You are the author of two books on World War II: The Things Our Fathers Saw and A Train Near Magdeburg .  What is it that makes you particularly interested in World War II?

I was born sixteen years after the war ended, and I grew up in the company of men and women who fought in World War II. Probably like most kids my age, I had no idea what they did, and like most kids, I did not think to ask. Some of my teachers in school were veterans of World War II, but I don't remember anyone ever specifically launching into a story about their time in the conflict. It's also possible that they did, but I was not paying attention.
In the late spring of 1984, all of that would change. On television I watched as the 40th anniversary of the Normandy landings was being commemorated over in France. Thousands of American veterans joined their Allied and German counterparts for a solemn tribute and reunion tours of the battlefields where they had fought decades earlier. Many of these men would have now been just hitting their stride in retirement. It was also the first time in nearly 40 years that many would be back together to ruminate on their reawakening past. And here it was that I woke up and was moved.
I returned to my high school alma mater in 1987 as a teacher of history. I found myself spending a good chunk of time each spring lecturing enthusiastically about World War II, and it was contagious. There was a palpable buzz in the classroom. All the students would raise a hand when I would call out for examples of grandparents or other relatives who had served in the war—frequently two hands would go up in the air. Every kid had a personal connection to the most cataclysmic event in the history of mankind—and in the late eighties, many of the soldiers, airmen, Marines, and sailors who came home from the war were still with us.
Building on that blossoming interest, I created a simple survey for students to interview family members. I had hit upon something that every teacher searches for—a tool to motivate and encourage students to want to learn more, for the sake of just learning it.
I was haunted, though, by one survey that was returned. When asked to respond to a simple question, a shaky hand wrote back in all capitals:

I DON’T KNOW HOW YOU COULD MAKE YOUNG PEOPLE TODAY UNDERSTAND WHAT IT WAS LIKE TO GO THROUGH A NIGHTMARE LIKE WORLD WAR II.

He was right—nobody can interpret history like those who were there. Maybe I took that as an unconscious push to bring the engagement into the students’ lives even more personally. Young people who despised school stopped me in the hall to voice appreciation after listening to the veterans who came to our school to speak.
Shortly after the 50th anniversary of the end of the war we initiated a dedicated project, and young people fanned out into the community and collected nearly 200 stories, forging bonds and bridging generational divides, bringing happiness and companionship to their elders. They became ‘collectors of memory’ and these students of history had a hand in creating new history, adding an important tack on the scholarship of World War II that would have probably otherwise been lost. In that regard, the books in my series are unlike most other World War II titles on the bookshelves today. But The Good War by Studs Terkel was a catalyst. 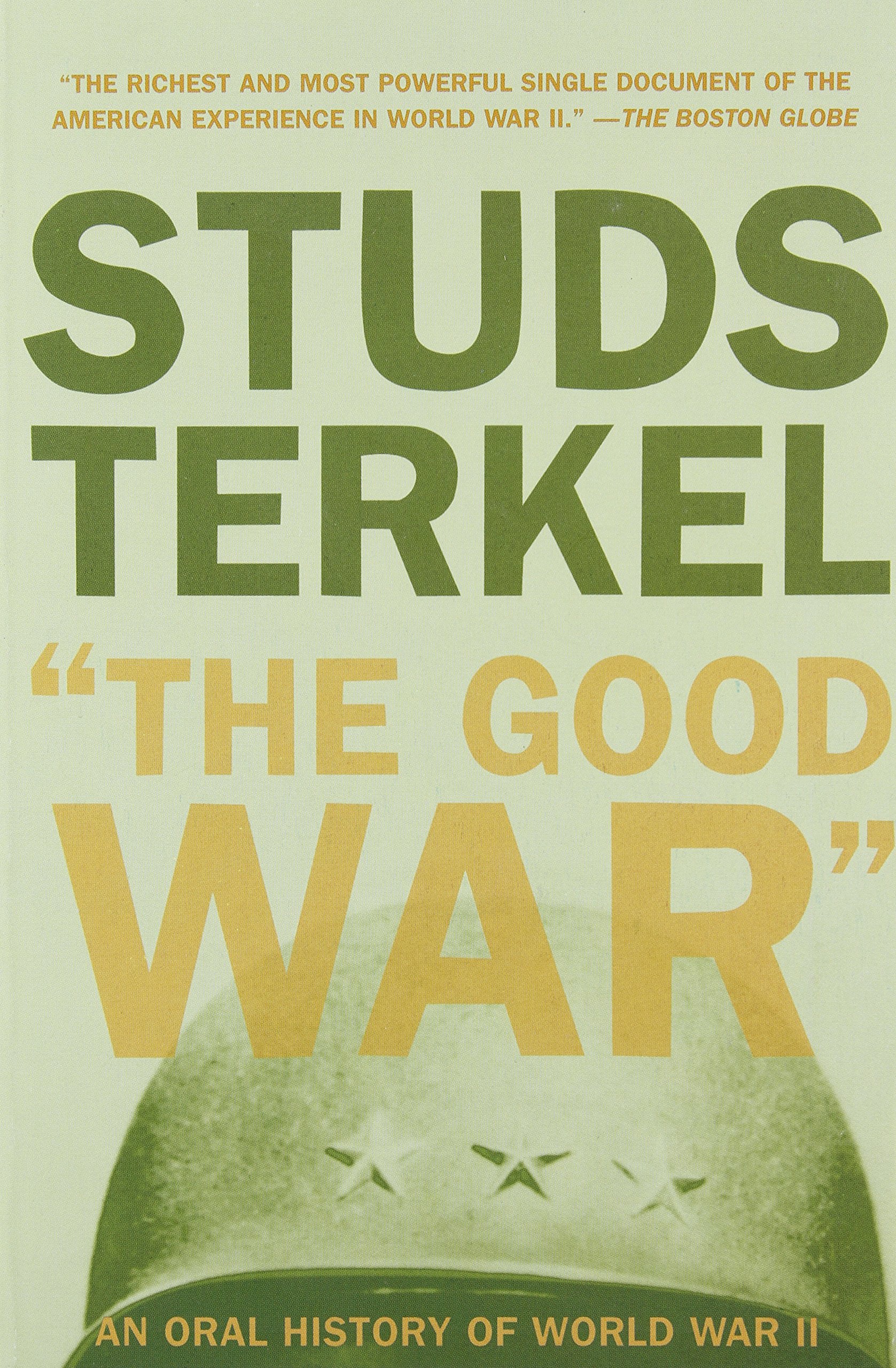 You said that your first choice,  "The Good War" - An Oral History of World War II –  by Studs Terkel is the book that set you on your path.  Please tell us why.

It was a collection of stories that were told by the persons themselves, about how WWII effected their lives. Some were famous, many were not, just ordinary people talking about the war that shaped their lives, and the world. And it was awarded the Pulitzer Prize!

This book not only focuses on the soldiers, but also how ordinary Americans at home experienced WWII.  What were your thoughts on this?

These are the untold stories that we need to hear today. Someone said that when an older person dies, it is like a library burning down. These stories, our history, are lost forever.

Terkel interviewed and recorded 120 people in his research for The Good War. You did something similar when you researched your book.  Why is this a good approach?

He was my model. His book- and he wrote many, many others where the common men and women spoke for themselves- was required reading for many of my students. 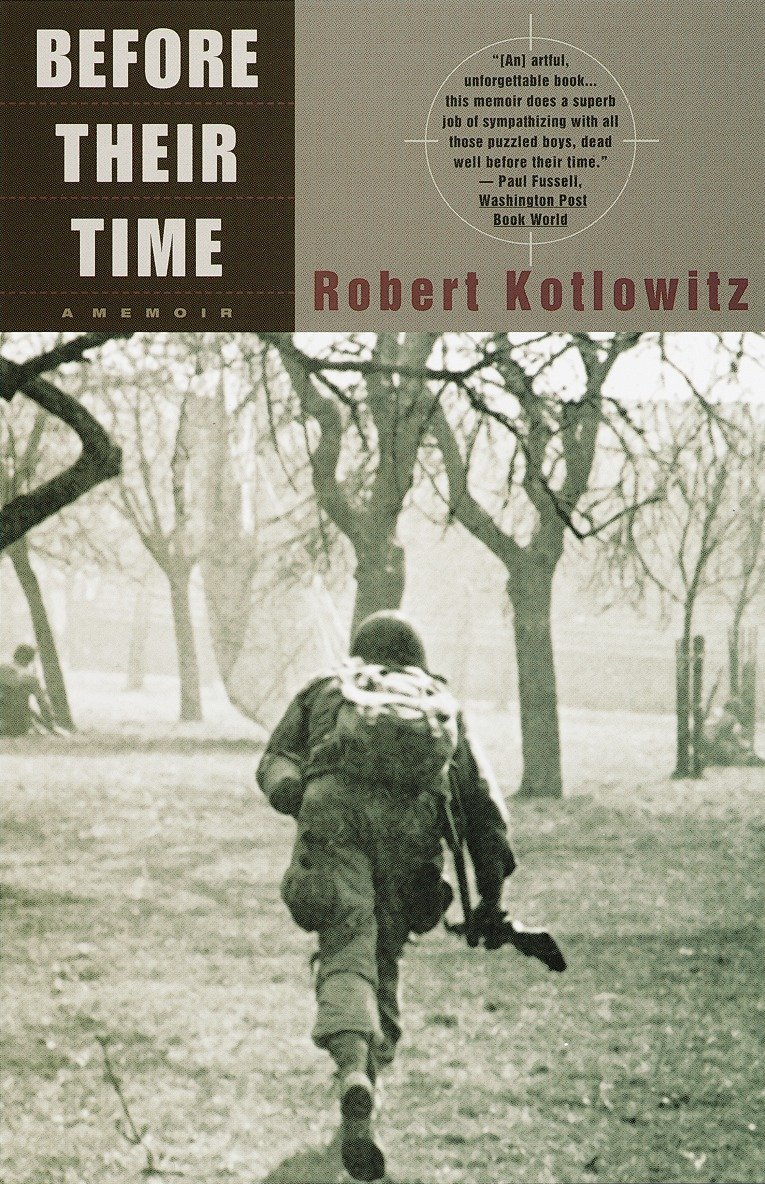 Your next choice is Before Their Time: A Memoir by Robert Kotlowitz  (Author).  What did you find so compelling about this book?

It was first person, it was heartfelt: like Terkel’s book and my other picks, it epitomized the tragic nature of all war.

Kotlowitz is not your typical "hero" one so often reads about in War stories.  He survived the massacre of his platoon by playing dead.  Why is it important to also hear from "heroes" like him?

In writing nearly half a million words in my books, the word ‘hero’ does not appear at all. Every soldier I talked to will tell you that the heroes did not come home. But Kotlowitz is a hero to me because he chose to write about his experiences through the lens of the pain of war. He exposed soldiers’ weaknesses and regrets by writing about himself, and I think that is an important lesson. How do you talk about the trauma? Most veterans who came home did not. He made the effort, and I’m sure it was therapeutic for him, just as getting veterans in their twilight years to open up to teenagers. 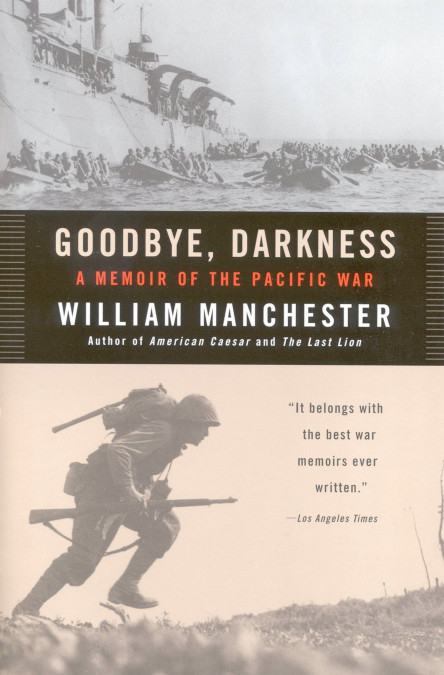 The next pick in line is Goodbye, Darkness: A Memoir of the Pacific War by William Manchester.  What are your thoughts on this book?

Manchester, a respected historian, was writing about his 19-year-old self, fighting in the Pacific. He went back and retraced his steps. It is an interesting book, and again, therapeutic for him. I think it is so important for people who have never had the experience of combat to read.

This book not only deals with the battle in the Pacific, but also with the PTSD the author struggled with, 23 years later.

Yes. Again, I’m sure it was therapeutic.

Some of the most haunting tales in the book are on how the civilians, the islanders avoided being captured by committing suicide. We have heard many more stories like this from WWII. Why, do you think did the other side see the Allies as such monsters that they would rather take their own lives than fall into our soldiers' hands?

In the case of Marpi Point, on Saipan, or other places like Okinawa,  Japanese propaganda was totally responsible. Americans were going to torture rape and murder any civilians after the battles. 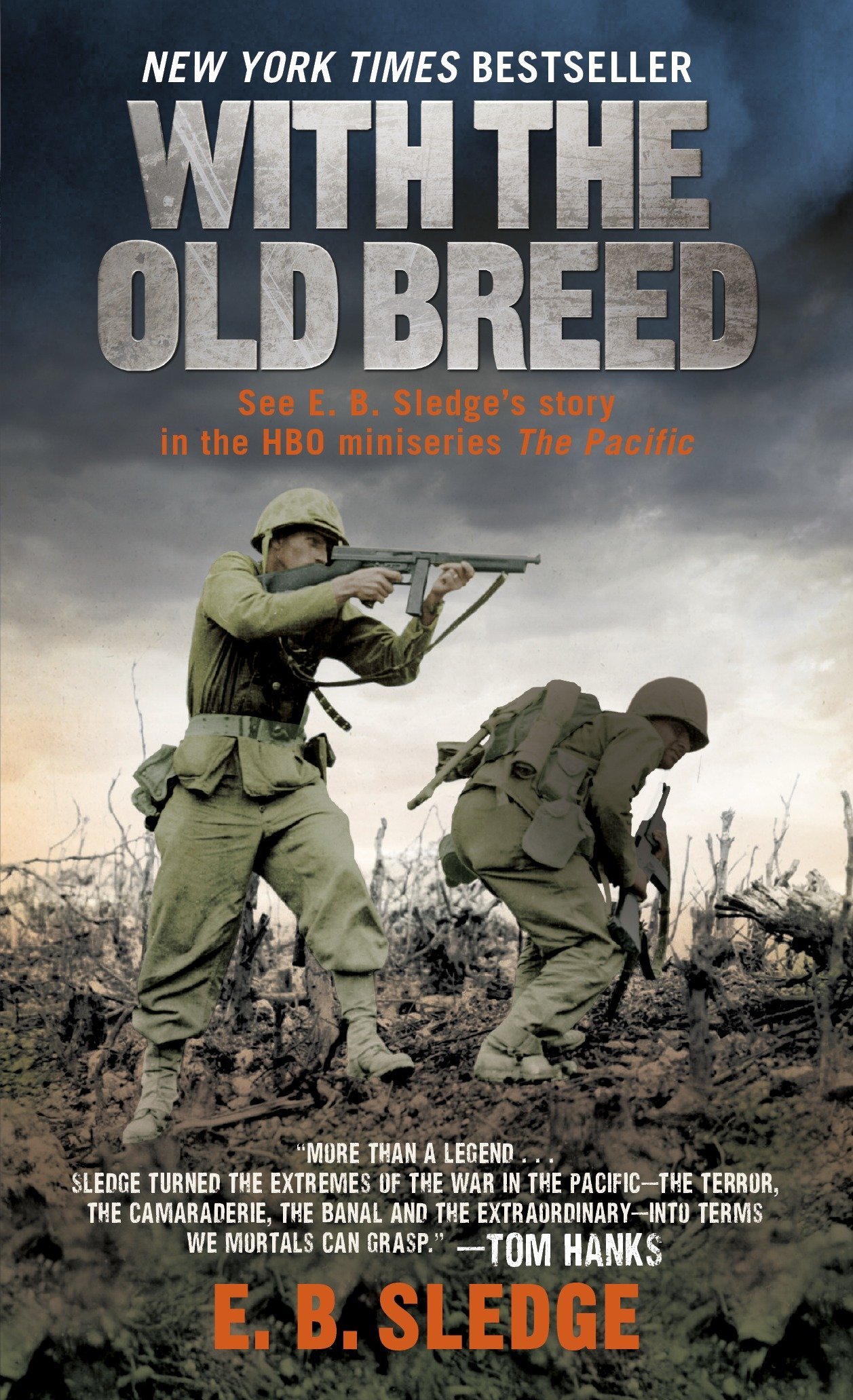 Tell us more about your next choice:  With the Old Breed: At Peleliu and Okinawa by E.B. Sledge.

Eugene Sledge was a mild-mannered young man from Alabama who enjoyed a career after the war as a professor of ornithology. He never hunted or picked up a gun again after the war. One of my older friends marine Dan Lawler, was in the same company with him in combat at Okinawa (both men are in my first book on the War in the Pacific.) He said he used to tease Sledge-whose combat nickname was ‘Sledgehammer’- by calling him ‘Rebel”.

This book is a very brutal account of the reality of war.  Some readers say that it made them understand why family members who had fought in the war refuse to talk about it. Why do you think it important to also read books like this, without any sugar coating or false patriotism?

Sledge’s memoir of combat-notes for which were written on pages of his pocket Bible- has been lauded by combat veterans as the most real personification of conditions of war. Near retirement, Sledge was haunted by recurring nightmares of his time in the war. He wrote the book-or as he stated, it was like it was being dictated to him- feverishly. The nightmares subsided, and he began to hear from some of his old combat buddies, like my friend Dan Lawler. 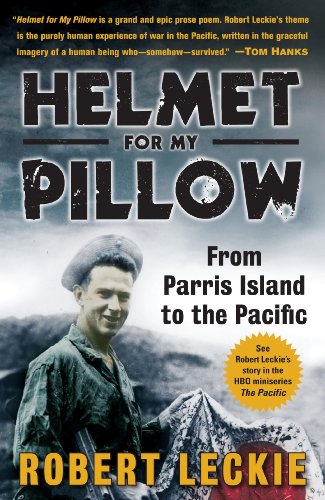 Your next choice, Helmet for My Pillow is lauded as one of the top reads covering America's Pacific War. Do you think it deserves that title?

Yes. Again, the experiences of a combat Marine, warts and all, written by one who went on to become a respected journalist.

Some critics say that Leckie seems to have a great resentment toward leadership and authority, and it shows in this book.

I admire a man who can be his own man, who can question authority, suffer the consequences perhaps, but make his point.

The book focuses mostly on the experiences of the Marines during WWII, but also highlights the times in-between battles - the drinking and womanizing.  Why is it also good to see this side of the war?

I suppose it is because that was the way it was for him, and them.

Both From Parris Island to the Pacific and With the Old Breed were used in the HBO miniseries The Pacific.  Did you watch the series?, if so - what did you think about it?

Yes, I own it, and it was good enough that I even used parts of it in class with my students who were old enough. I would also recommend Ken Burns ‘The War’. Burns also profiled Eugene Sledge and his friends.

Any last thoughts on why learning about the experiences of people who lived WWII still matter today?

Another World War II memoirist once wrote, 'Ignorance and apathy are the greatest dangers to freedom.' I agree, but as a lifelong history teacher, and now author, I contend that it begins with people simply not being exposed to the history to begin with. For how could one not be drawn into these stories, the human drama, the interaction and the emotion that goes into putting an ideal first? After sitting at their table, how could you not give weight to what they have seen, and where they think we are going, as a people, as a nation? I saw this spark kindled time and again in my classroom, when we got to hear from real people who had a front row seat, who acted in the greatest drama in the history of the world. I think it is important to have them tell you themselves, about the world they grew up in, the challenges and obstacles placed on life's course, and how a generation of Americans not only rose to the challenge but built the country and the freedoms that we enjoy today. They truly saved the world. Be inspired. Share their stories; give them voice. Lest we forget.