Editorial Review: A Knock Knock Joke A Day by DaddiLife Books
Posted on 16th of March, 2022 by Heinrich Bolton 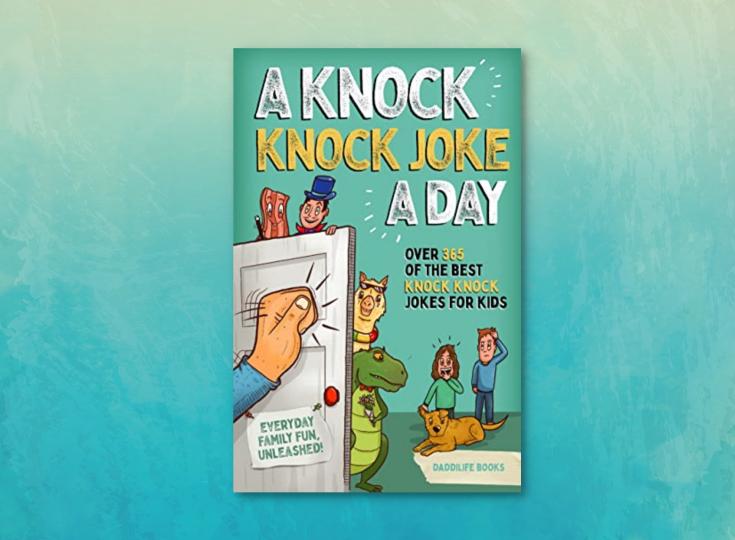 "Knock knock" jokes are a staple of any dad's arsenal and A Knock Knock Joke A Day features over 365 of the best ones. The witty jokes in this book are perfect for both the young and the young at heart.

A Knock Knock Joke A Day kicks off with a brief look at the history of these types of jokes as well as a short guide on how to tell them correctly. It then launches straight into the promised joke, a day that will last you a whole year if you have self-restraint. However, the more likely scenario would be reading this book from cover to cover in one sitting while subjecting everyone in earshot to the contents. The book also features jokes for specific days throughout the year, but kudos to anyone who can keep these to themselves until the appropriate date.

A Knock Knock Joke A Day is perfect for kids aged 6-12, so if you are older, the chances are that you will have encountered some of the jokes before. Nevertheless, unless you have actively been keeping up with these types of jokes, you will find plenty of fresh ones too. Even if knock-knock jokes are not your cup of tea, it is hard not to laugh at some of the witty puns, silly gags, and unexpected punchlines in this book. The majority of the jokes in this book will elicit groans from your audience, which is actually the desired outcome for this type of humor!

A Knock Knock Joke A Day is the work of DaddiLife Books, the publishing division of DaddiLife, an online platform, and a community for modern-day dads. This book makes it clear that they went to a lot of effort finding jokes that would appeal to younger audiences while also helping parents to increase their "dad joke" repertoire. They claimed to have tested every single joke on their own real-live subjects, and after doing the same, I can confirm that most of the jokes are a hit. You know a joke is good when your child practices it to repeat to their friends, and a lot of the ones in this book ended up in that category.

It's not just the jokes in this book that is of a high standard, but the presentation too. Each month is color-coded and features a funny illustration of the first joke of the month. For example, the illustration for May is a gorilla grilling some burgers while August has an Alpaca in swimming trunks. These provide some nice visual humor to go with the jokes and perfectly illustrate how cheesy (in the best possible way, of course) some of the punchlines are.

Not everyone likes knock knock jokes, and with this many jokes in the collection, a few are very similar. In addition, not all of them are knee slappers, but it's definitely not a case of quantity over quality. So, if you have a sense of humor and would like to put a smile on your younger kids' faces while reveling in the groans of your older ones, this is the book to get.