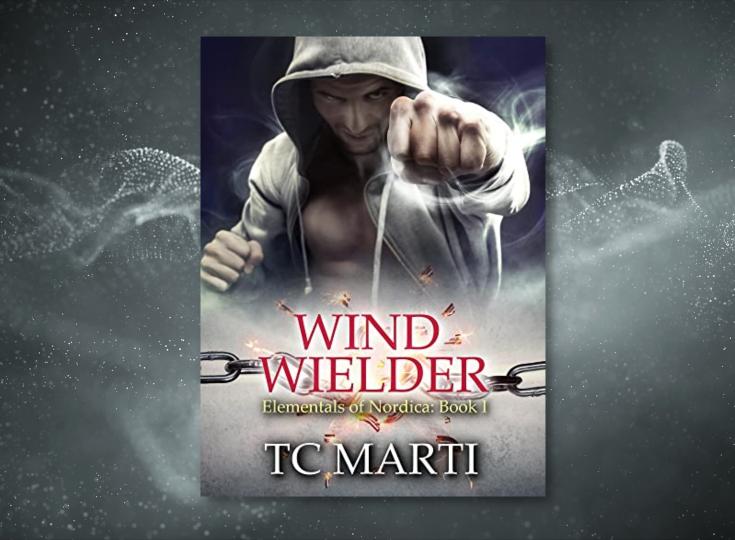 T.C. Marti’s recipe for Wind Wielder takes a swag of X-Men mutant oppression, a swirl of Harry Potter’s quidditch exuberance, a dose of coming-of-age angst, and cooks everything up in classic Chosen One fantasy territory. Throw in a political conspiracy, thwarted love, and a nasty, corrupt dictatorship and there’s plenty going on in one novel.

Sion Zona is an arrogant, narcissistic college student living in a society that licenses mutants only if they join the military or are born to the wealthy elite ruling class. He, his friends, and cousins have each been illegally practicing one of nine possible mutant skills that they have inherited from parents killed in the ten-year war. Sion is a talented wind wielder; his “past her use-by date” girlfriend, Liri, can teleport in a puff of smoke.

When they participate in a riot protesting against repression, they become the hunted targets of the Tamurian Youth; led by fire-wielding Raj Worthy. Escaping to the protection of the liberal Northern Alliance, Sion and his band are granted a university scholarship if they play ball (literally) and join the alliance after being fully trained in their powers. They overcome the death of close relatives, friends, and an entire community and settle into a free, new existence with surprising resilience.

Sion is free to focus on demonstrating his prowess at thrashball (Marti’s invention), becoming the alpha male on the Phoenix City team, getting a sexy new girlfriend, and generally strutting his stuff.

What he fails to consider is why Col Erikkson, leader of the Northern Alliance, saved them all from the south. Or why Lord Tuuka Worthy of the corrupt south wants them all dead. Of course, Sion can’t just play ball forever and must eventually take up the fight as his true purpose becomes an inescapable fate.

Marti doesn’t hold back on the action with empowered fights from start to finish. Flames are thrown, wind vortexes spin, blood is poisoned, the earth shakes, and trees are uprooted. Thrashball games and fight scenes are lovingly described, throw by throw and blow by blow. The pace occasionally slows as the author lapses into extended political speeches in an overdose of telling and teaching his worldview.

Marti’s style is exuberant and enthusiastic as he pushes his somewhat sulky, selfish, and immature band toward a world-saving destiny. While the energy of the story will sweep many readers along; it would benefit from independent editing to tighten and polish language to allow Wind Wielder to fly.

At its heart, Wind Wielder is an adventure story that thrives on fast-paced action. For those seeking a new fantasy world, Marti combines familiar themes, plot lines, and characterization and twists them into an engaging young adult read.

Note that Wind Wielder is the first in a planned trilogy and while it stands alone as a full-length novel, it does not conclude the story of Sion and his friends.